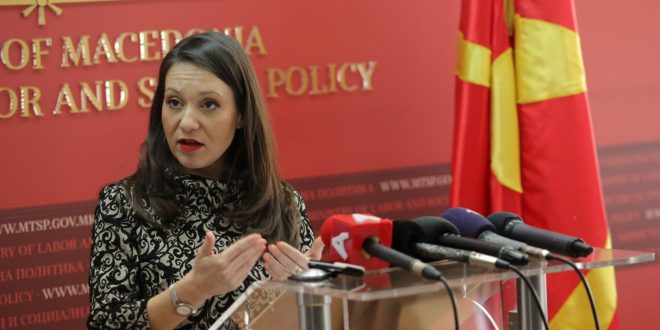 The parliament in North Macedonia has voted to fire Labor Minister Rashela Mizrahi for failing to use the country’s new official name during a press conference — a sensitive issue in the Western Balkan nation following a long-standing dispute over the moniker.

Last week Mizrahi triggered a storm of reactions in her country and in Greece when she held a press conference standing in front of a plaque bearing the old name, Republic of Macedonia.

Following six hours of debate on February 14, the parliament voted 62-26 to dismiss Mizrahi, a member of the opposition VMRO DPMNE party, from the caretaker government, media report.

The vote came after Prime Minister Oliver Spasovski submitted a proposal to lawmakers to fire Mizrahi because she violated the constitution by failing to respect the so-called Prespa agreement and thereby endangering North Macedonia’s European integration efforts.

Skopje signed a historic agreement with neighboring Greece at Lake Prespa in June 2018 that called for the country to change its name to North Macedonia from Macedonia, removing a barrier to potential European Union membership.

Athens had objected to the country’s use of the name Macedonia, saying it implied designs on Greece’s province of the same name.

The agreement, which was approved by parliaments in both countries, faced opposition from nationalists in Greece and North Macedonia who say it gave too much away to the other side and impinged on national sovereignty.

A North Macedonia government statement before the vote said that the prime minister and the government had “an obligation to secure protection of the constitution.”

“Having in mind that Minister Mizrahi is consciously and deliberately breaching the constitution, and thus endangering the Euro-Atlantic future of the country, the PM has submitted a proposal for the dismissal of the technical minister…to parliament,” it said.

Mizrahi comes from conservative VMRO DPMNE party, which was ousted from power in 2017. Many of the VMRO-DPMNE’s supporters opposed the Prespa agreement and several senior party officials have vowed to seek to reverse the name change.

She later claimed she would never change the name on the plaque, saying, “I am prepared to pay a fine if it comes to that.” [rfe]