Breaking News
Home / News / Politics / Greece / Greece has a role and a say in the situation in Libya, FM Dendias tells Guterres 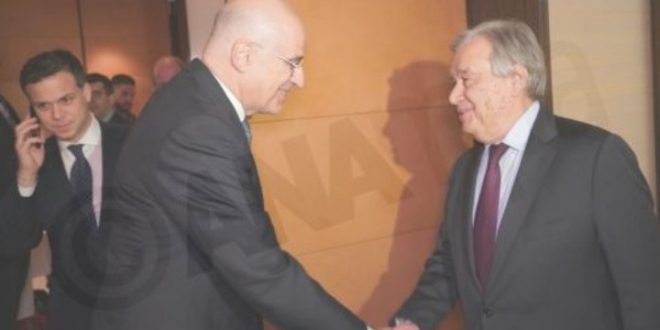 Greece has a role and a say in the situation in Libya, FM Dendias tells Guterres

February 25, 2020 Greece Comments Off on Greece has a role and a say in the situation in Libya, FM Dendias tells Guterres 267 Views

Greece, as a neighbour of Libya that is directly affected by developments there and as a factor for stability in the region, also has a role and a say in the situation in Libya, Foreign Minister Nikos Dendias stressed during his meeting in Geneva with UN Secretary General Antonio Guterres.

These developments “include illegal acts that incite conflict and undermine peace and security in the region,” Dendias noted in a written statement after the meeting.

He also expressed Greece’s strong support for the efforts made to arrive at a political resolution of the Libyan crisis, led by Ghassan Salamé, Special Representative and Head of the United Nations Support Mission in Libya (UNSMIL).

The foreign minister also discussed with Guterres the next steps in the Cyprus issue, stressing that “we strongly support the efforts of the UN Secretary General to resume talks aimed at a just and sustainable solution to the Cyprus problem, based on the relevant UN Security Council decisions and the acquis communautaire.”

In his statement posted on the website of the Foreign Ministry, Dendias did not make any mention whether he talked with Guterres about the country’s objections to the posting of the geographical coordinates of the maritime boundaries of the Turkey-Libya agreement, though.