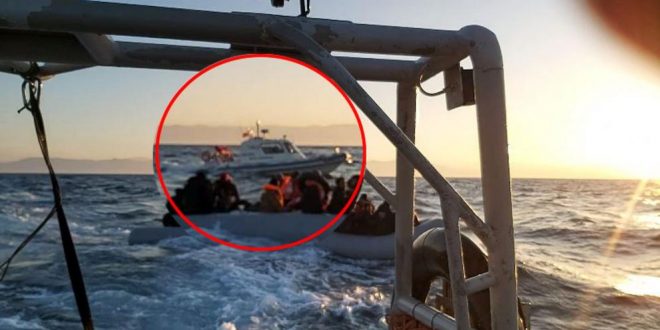 A child died and 47 migrants were rescued after their boat capsized off the Greek island of Lesvos, the Greek Coast Guard said on Monday. At least 1,000 people arrived on the Aegean islands in less than 24 hours. Vessels of Turkish Coast Guard accompany migrants boats.

It all happened at 08.30 a.m. in the open sea off the airport of Lesvos Airport. A boat carrying 48 migrants foreigners accompanied by a Turkish tugboat was moving along the Greek territorial waters.

When it entered Greek territorial waters and a Coast Guard boat approached, the passengers reportedly overturned the boat.

During the rescue operation, 46 people were rescued and two children were taken to the Lesvos hospital, one was unconscious. Doctors reviving efforts did not bring any positive result.

The other child is out of danger and in the general hospital of the island.

Meanwhile, boats keep arriving from the Turkish coast also on Monday, with a total of 320 people to have arrived on three Aegean islands, so far.

From the dawn until 10 a.m., five boats with 200 migrants and refugees arrived on Lesvos, two boats with 70 people to Chios and two more boats with 50 people on Samos.

The Greek Coast Guard said it rescued 164 refugees and migrants in six Search and Rescue operations in the last 24 hours.

According to local media, 977 people have arrived from Sunday down until 7 a.m. Monday morning.

In several cases, the boats are accompanied by vessels of the Turkish Coast Guard.

The Greek Coast Guard released one of two videos showing Turkish Coast Guard vessel accompanying a boat with refugees and migrants. The video is from the SAR operation during which the child dies.