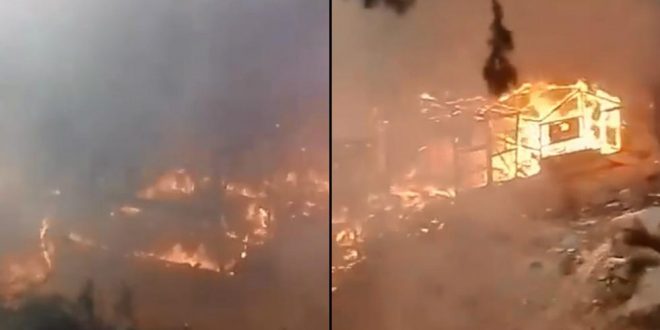 Three successive fires broke out in the migrants camp on the island of Samos on Sunday evening destroying accommodation for over 100 people. Fire brigades rushed to the area, an operation to evacuate the structure was launched. Tension between police forces and refugees occurred when the first initially prevented the latter to leave the area reportedly citing “restrictive measures due to coronavirus pandemic.”

At around 10:30 today (Sunday), the evacuation of the refugee structure (Reception and Identification Center) in Vathi, Samos, began, with the residents being promoted to Samos Square.

Three successive fires broke out inside and outside the reception and identification center in Vathi.

The first fire broke out at about 7:30 pm and burned down several tents. According to Médecins Sans Frontières, about 100 people were left homeless by the blaze.

A fire broke out in #Vathy camp, #Samos an hour ago leaving around 100 people without shelter. MSF teams are close to the camp & ready to offer medical care & psychological support to those affected by the fire. We cannot confirm any information regarding the cause of the fire. pic.twitter.com/oVQKS0eEyD

At around 8:30 pm, while the fire was in progress, police forces prevented the refugees from leaving the scene. Then a second fire broke out at around 9:00 pm and followed by a third, shortly before 10:00 pm.

Strong firefighter forces rushed to the scene to extinguish the fires, and large crowds of asylum-seekers began leaving the camp and gather at the main square of Samos.

Local authorities reportedly have contacted the ministry of citizens’ protection in Athens demanding the immediate decongestion of the camp.

It is unclear how the fires broke out. According to local media, there are continuous tensions between the several ethnic groups.

Local media report on Monday morning that there is tension between Aghans and Africans and that storng police forces are in the area.

Two firefighters were slightly injured during the operation on Sunday.

It is recalled that the center houses several of the approximately 6,500 refugees and migrants on the island.