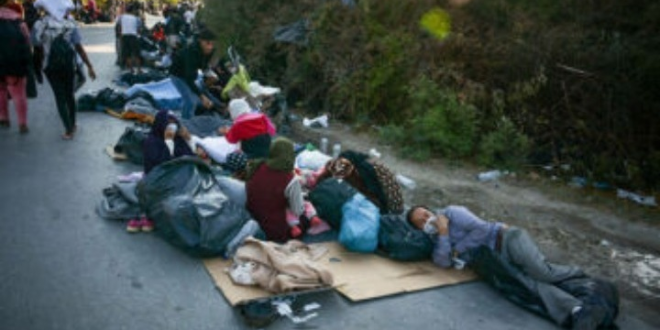 The situation on the island of Lesvos remain tense on Thursday, with thousands of refugees and asylum-seekers to have spent the night on roadsides, fields and even cemeteries, waiting for aid and a provisional shelter. Led by the Mayor of Mytilene, locals have set blockades to hinder the government from repairing fire damages in the Moria camp or embark the vulnerable among the homeless on a ferry. 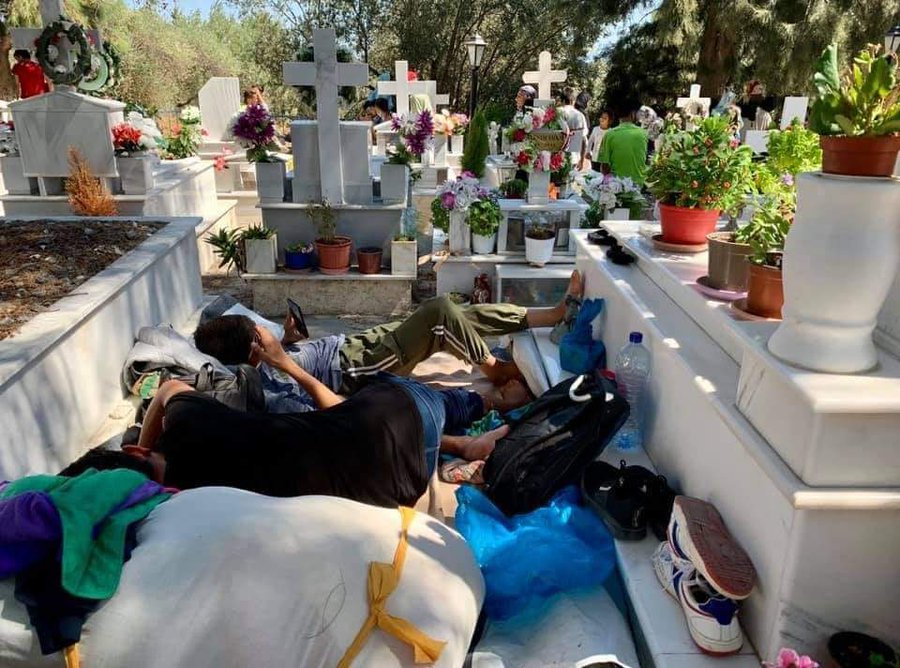 “People that lost their shelters in #MoriaCamp due to the fires are finding shade and temporary resting ground between graves in a Greek orthodox cemetery.” via @daphnetolis.

At the same time, new fires broke out in the camp also early Thursday afternoon to burn down what was not damage din the last two days.

While signs hind to an “arson plan,” so far, no perpetrators have been captured, no report by the Fire Service has been issued.

The government desperate tries to find solutions to the crisis that has emerged on the island but it is extremely difficult without the support by the local authorities and the people.

Refugees and locals seem to agree on one point: This is “hell on earth” for both sides.

The island has been declared a state of emergency for four months.

Fires broke out again inside the camp early Thursday afternoon. According to state news agency amna, the fire broke οut simultaneously in three different points of the hotspot.

The fires broke in a camp section that was not damaged by the fires on Tuesday and Wednesday, and where refugees were still living. 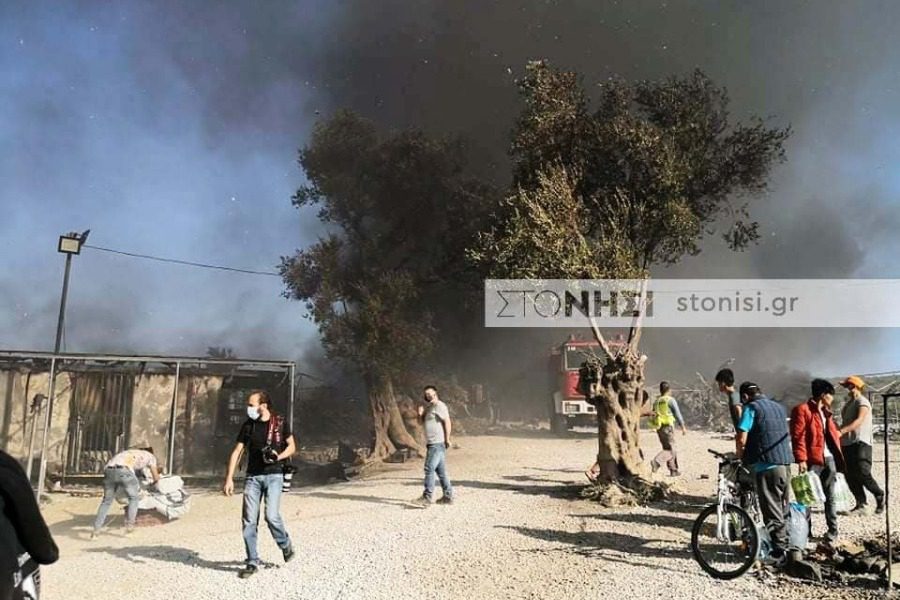 The latest fire shows that despite the fact that the government has deployed several squads of police there, there is not policing in the area, which is an arson crime scene, after all, as the government says.

According to local media stonisi, “the new fires today now prove the existence of an organized arson plan by unknown centers and for reasons currently unknown. A plan that the Police seems to not be able to deal with.”

Refugees for a second time

Over 12,000 people spend the second night on the streets, slept next to garbage bins and police buses. Some found no other place to spend the night other than between graves of a cemetery. 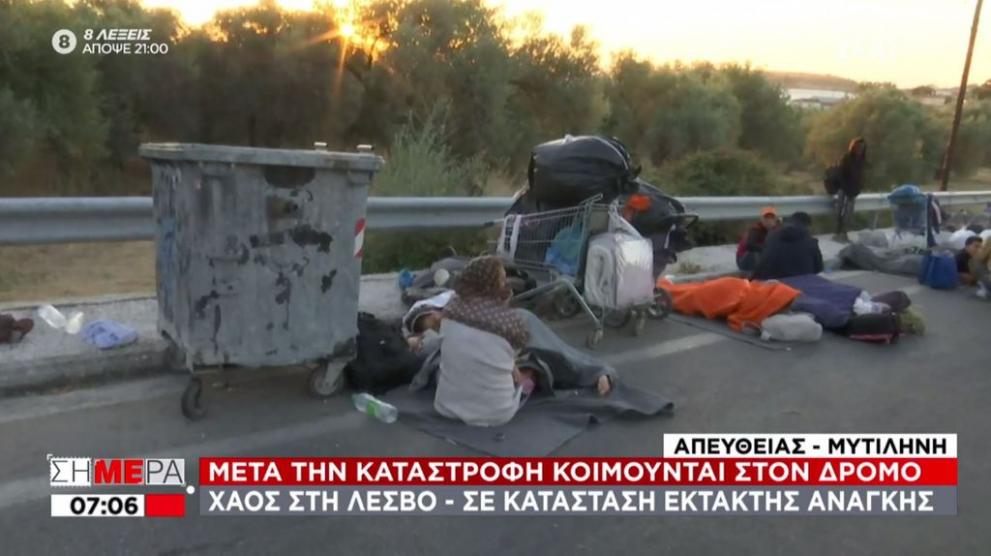 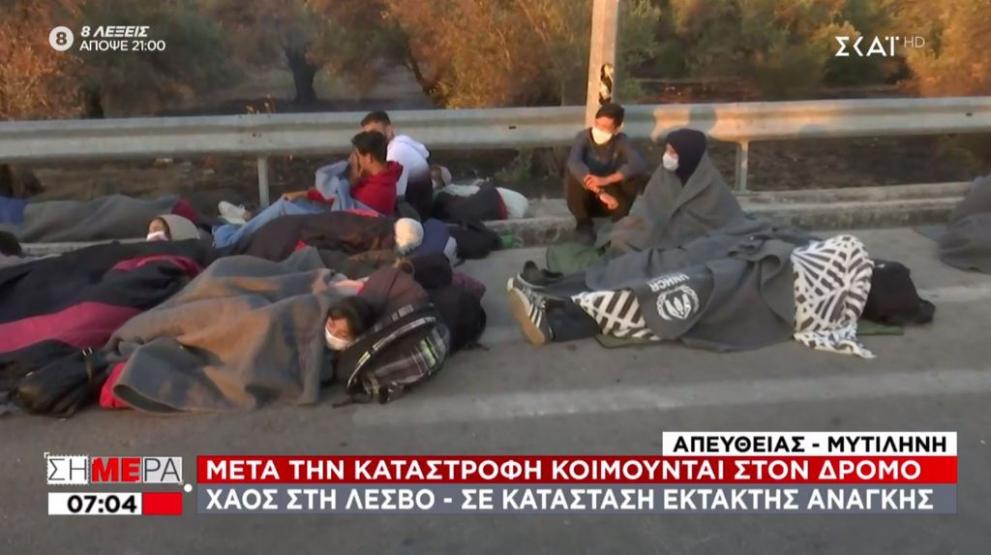 Helpless without shelter and food, after the fire damage, they grabbed their children, helped their elderly, packed whatever they could save and left again for the Unknown and a new nightmare. 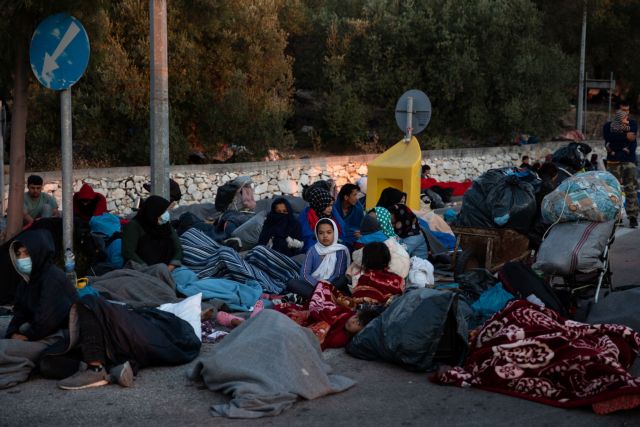 Riot police does not allow the refugees to reach the island capital Mytiline and set blockades at the road to Kara Tepe, where another camp operates.

In the early morning hours of Thursday, the crowd threw stones at the police forces that responded with tear gas.

Among the tear gas target are also children that scream in fear.

At the same time, residents and members of local authorities are opposing the government’s attempt to repair the damage in the camp and make it available again for the refugees and asylum seekers. 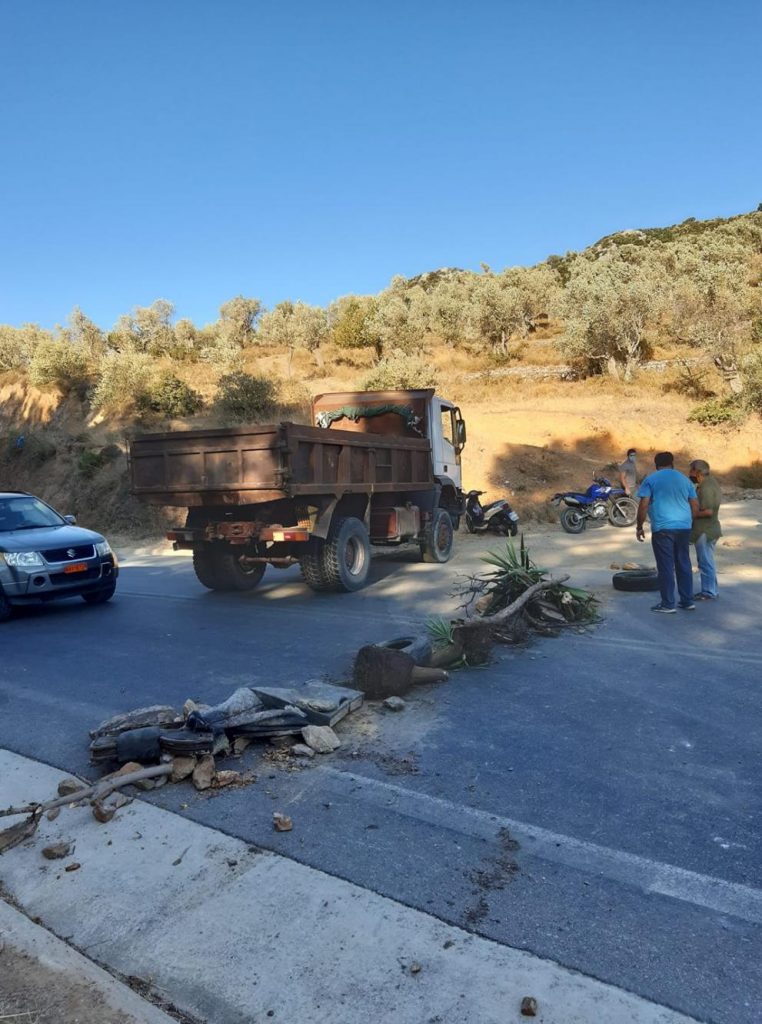 Local authorities of East Lesvos had repeatedly called for de-congestion of the camp. They belive that the new situation that emerged after the fire will have them relocate to the mainland.

They reject any government proposals to have the refugees accommodated in two military camps or in the area surrounding the Moria camp. 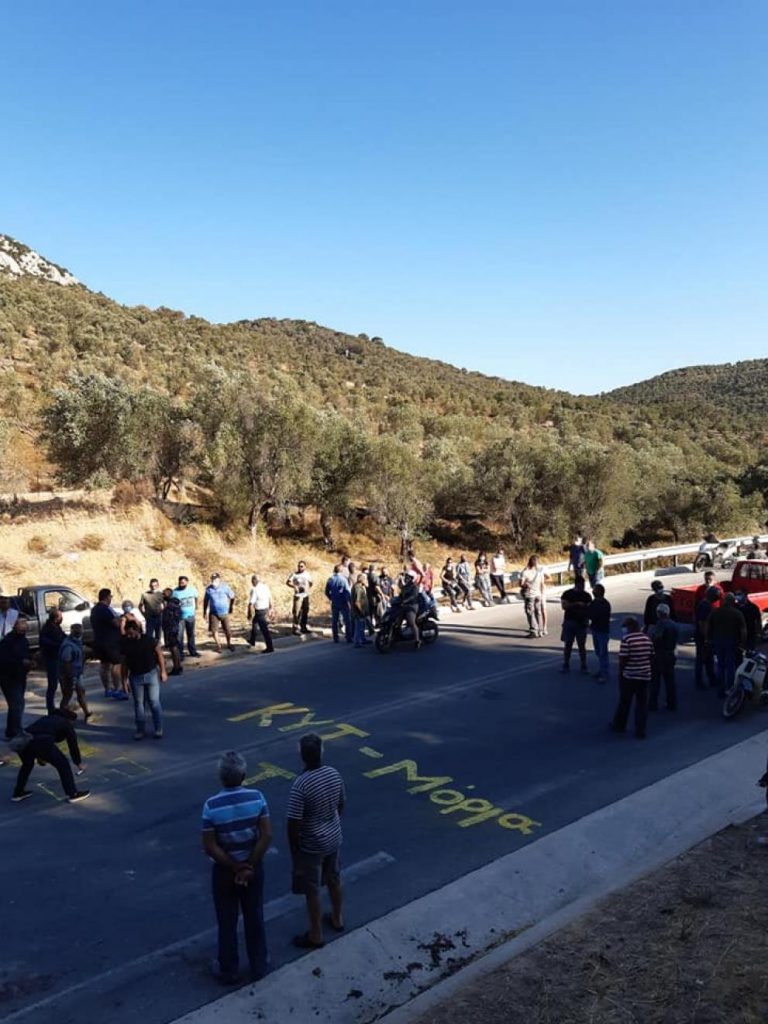 Trucks and other machinery deployed by the municipality hinders the cleaning of Moria by the Armed forces, while the mayor reportedly keeps calling on locals to strengthen the blockades. 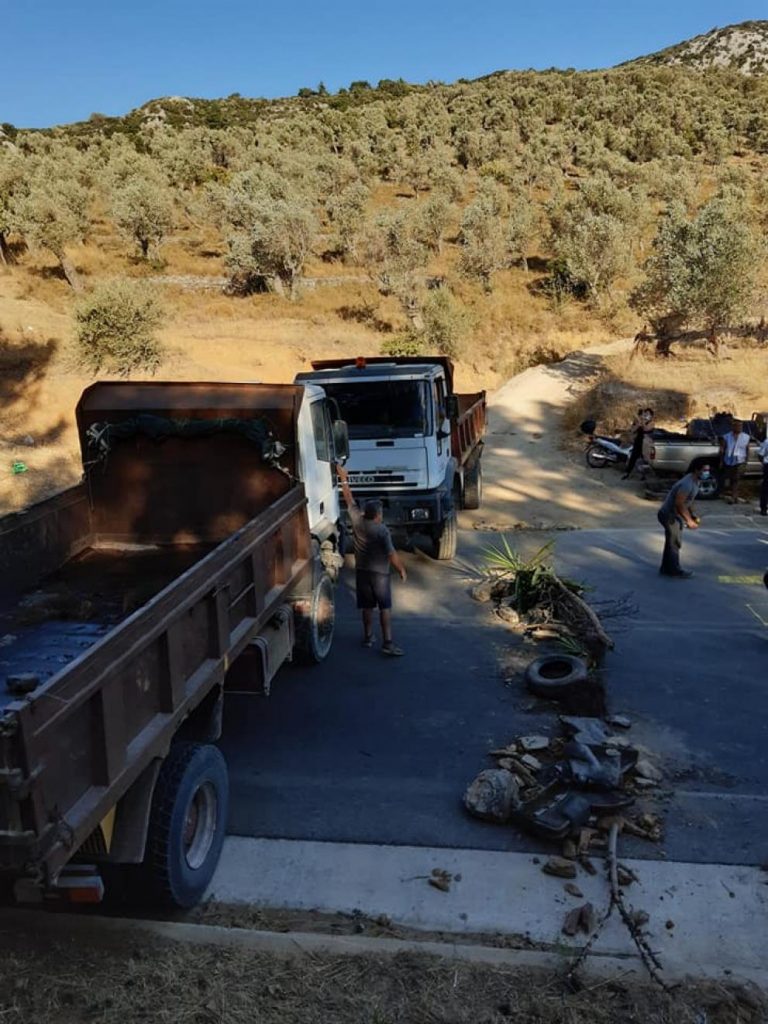 Mayor of Mytilene, Stratis Kytelis has been reiterating that he does not accept the reopening of Moria, the establishment creation of any other accommodation structure, even a temporary one.

He demands “the immediate refugees’ and migrants’ departure from the island in any way.”

“We have been insisting for a long time that there should be an immediate and massive de-congestion of the camp. It is not possible for a structure designed for 2,800 people to accommodate 12,000 people,” he repeated. 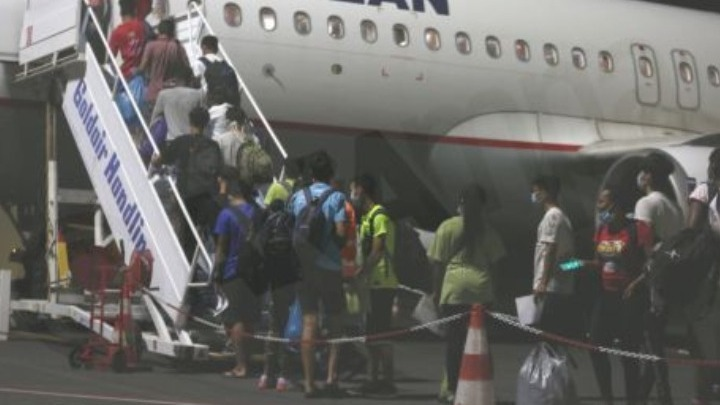 With three separate flights, 406 unaccompanied refugee children were transferred from the destroyed Moria center to Thessaloniki over night.

The children are temporary accommodated in hotels. Some of them will be transferred to other structures and some will be relocated to European countries in accordance with the relevant program.

Before their departure form Lesvos, all minors were tested for Covid-19. For precautionary reasons, they ill stay in quarantine for 10 days. facilities in which they will be housed will be quarantined for 10 days.

The flights were organized by the International Organization for Migration, funded by the European Commission and coordinated by the Special Secretariat for Unaccompanied Minors at the Ministry of Migration.

Gov’t housing plan about to fail 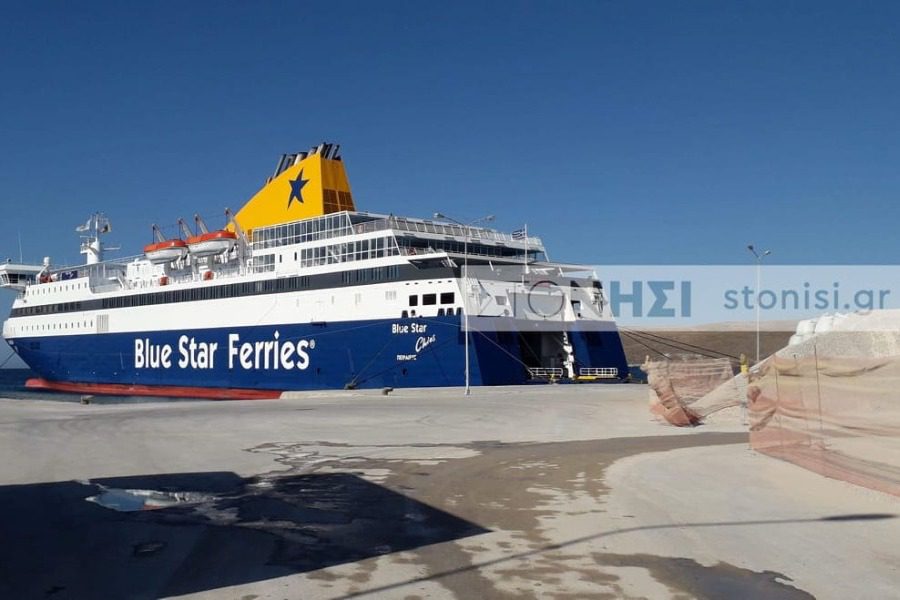 The ferry donated by the shipping company Blue Star Ferries for the accommodation of some 1,000 vulnerable groups docked at the port of Sigri and not at the port of Mytilene on Thursday morning. Immediately locals called for a blockade of the road.

The two Navy landing ships for the temporary accommodation of another 1,000 vulnerable people may never come. The Defense ministry has allegedly refused to deploy them amid a Greek standoff with Turkey.

The government is in an extreme difficult situation and is looking for other solutions.

The Migration Ministry said in a statement on Thursday that “all the necessary actions for the immediate housing of vulnerable people and families of the Moria hotspot in specially designed areas will be carried out within the day.”, a migration and asylum ministry announcement said on Thursday.

“The primary concern of the government is the safety of all concerned,” the announcement added, and concluded that “Behavior aiming to blackmail will not be tolerated.”