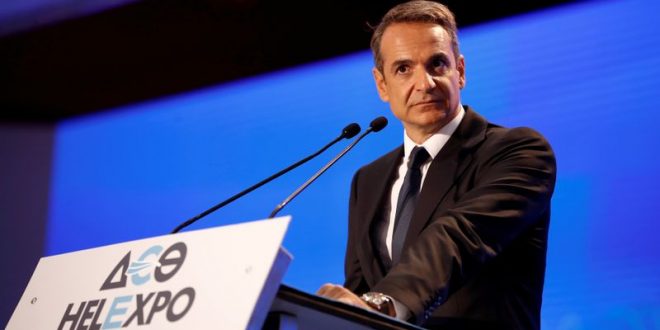 Amid ongoing tension with neighboring Turkey and support from France, Greek Prime Minister Kyriakos Mitsotakis announced on Saturday evening that the Greek Armed Forces will acquire next to weapons also 18 Rafale and 4 new frigates.

From the floor of Thessaloniki HELLEXPO, the Prime Minister said that Greek Defense has suffered from disinvestment all this years and that it is time for a re-balancing.

He announced the following “significant pillars” to strengthen the Armed Forces and the Defense Industry:

Activation of the Defense industry and investors in Skaramagkas Shipyards and ELVO, the Hellenic Vehicle Industry for the Greek Army.

Recruiting 15,000 new professional soldiers over the next 5 years.

Mitsotakis did not reveal the cost of this mammoth defense program amid economic impact of the pandemic.

Speaking at a press conference on Sunday, the Prime Minister said that it is too early to budget the program as procurement has not announced yet. He added that the program was “ambitious, but within the country’s economic potential.”

He said that the 18 French Rafale aircraft “will replace the older Mirage 2000” and the forecast is that the first aircraft will arrive in Greece in the middle of 2021.

He added that the procedure will be completed by the beginning of 2022 at the latest.

Some experts told media that the cost for each Rafale was 75 million euros.

Before going over to announce the defense program, Mitsotakis said that Turkey tries to destabilize the whole Eastern Mediterranean. Main difference, delineating maritime zones, must be resolved at International Court of Justice. Dialogue with Turkey will only begin after provocations stop.