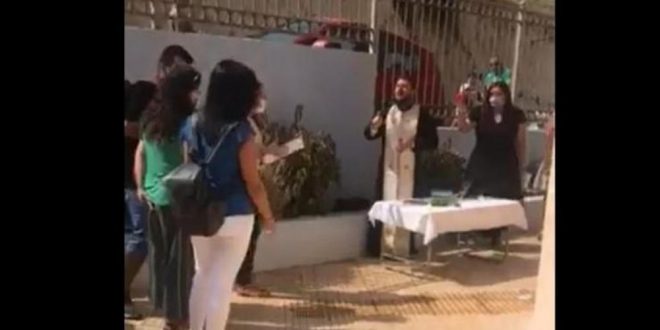 A priest in Rethymno, Crete, was sentenced to nine months in prison on Friday for inciting the public for disobedience against the National Public Health Organization’s directive on the mandatory use of face masks.

The 47-year-old priest, whose sentence was suspended for three years, spoke against the use of face masks while performing a blessing ceremony during the opening of a local kindergarten on Monday.

In a video circulating on social media, the priest is heard shouting at present parents that “they will destroy their children” and criticized them for not holding a rally to protest the use of masks.

Annoyed by his words, teachers and parents argued “this is a school” and not a place for him to hold a …sermon.

Whereupon, the furious clergyman claimed they were supporters of left-wing SYRIZA and accused them for “rallying in favor of homosexuals, of Fyssas [the rapper killed by a Golden Dawn member in 2013] and Alexis Grigoropoulos [the 15-year-old killed by a policeman in 2008] but not against the masks.”

The priest was arrested for inciting the public to violate the laws of public health on Tuesday and taken to court on Wednesday where he surprisingly was wearing a mask. He asked for a postponement of his trial. The new date was set for Friday.

It should be noted the strong society reactions to the video reportedly forced the Hierarchical Association of the Diocese of Rethymno and Avlopotamos to issue a statement, in which they emphasized that the priests’ views “in no way express the members of the Association.”

During his trial, the priest reportedly refused to wear the protective face mask and told judges that he would sue them for wrongdoing. The judge told him that he would not accept threats.

The man had not hired a lawyer and refused to apologize.

Speaking to local media after the trial, he said it was not him who was tried, but the truth, the law and God. He added that he performed his duty without remorse and with pride.

A monk who accompanied the priest in support claimed that wearing a mask was against the Constitution.

The priest said that he will appeal against his sentence.

The government has imposed the use of masks in all closed spaces and schools as the coronavirus infections have surge in the last few weeks. 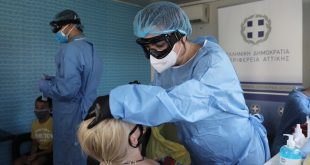 Greece’s health authorities announced on Wednesday 16,115 coronavirus cases and 3,023 reinfections, that is a …