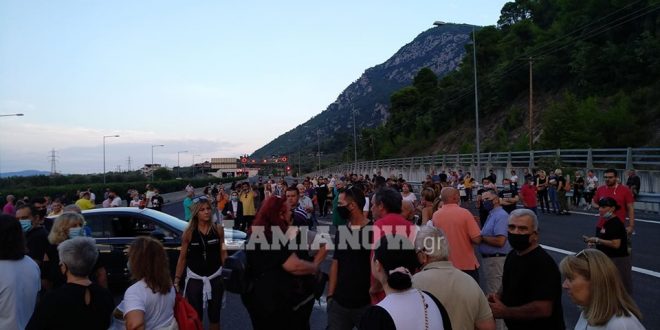 Residents and local authorities of seaside resort of Kamena Vourla in Central Greece marched and blocked the highway lane to Athens on Wednesday to protest the presence of minor unaccompanied refugee children in their area.

It was the second protest rally on Wednesday, while they plan a new one on Thursday.

According to local media, Mayor of Kamena Vourla, Ioannis Sykiotis, announced that as of tomorrow, schools of all levels in the municipality will remain closed in protest.

He said that that they were not informed by the central government about the arrival of 39 refugee children who are accommodated in a spa hotel.

“Even the refugee children themselves do not want to stay in this area, this place is not good even for mice,” Sykiotis said adding that the closed hotel was hastily renovated in the last couple of days.

“It is not possible that others decide for us without us. So far we have no official information from the competent authorities, but information has begun to circulate that 4-5 hotels are ready to receive refugees. This will not pass. Today’s mobilizations were just the beginning…,” the Mayor said.

The 39 unaccompanied refugee children arrived today in Kamena Vourla are accommodated in the hotel in the town.

According to information another 32 unaccompanied minors are expected to arrive on Thursday and stay in the spa town until they are relocated to European countries.

Other local authorities said the arrival of the refugee children was sudden and provoked the reaction of the municipality residents and professional especially because the tourist season continues.

KTG understands that the unaccompanied minors belong to the group of 400 refugee children that were trasnferred to the mainland right after the fires in the Moria hotspot mid-September.

It is not the first time and will probably not be the last one that local communities on the mainland oppose government’s actions regarding the settlement of refugees, whether children, families or adults.