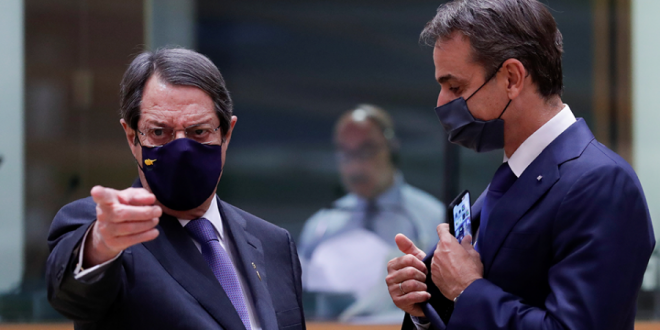 Greece joined Cyprus against the conclusions draft of the European Union Summit describing it as “unacceptable” as it was not mentioning the issue of sanctions against Turkey but it was merely expressing “solidarity with Greece and Cyprus.” It was the second draft following rejection of the first one that had left tensions in the Eastern Mediterranean Sea aside.

The draft is unacceptable because it is unbalanced,” Greek government spokesman Stelios Petsas told state broadcaster ERT TV during an interview at Prime Time News at 9 p.m. Thursday.

“It is an important meeting for the Euro-Turkish relations and not only for all the external relations of the EU,” the government spokesman said.

He stressed that “especially on this issue of the agenda, which is again the debate on which path Turkey is following, as it seems to be slipping away from the West, the basic text proposed as the first basis for discussion is not accepted by Greece. And it is not acceptable because it was not balanced.”

Speaking about Greece’s objections to the draft, Petsas outlined four pillars that have to be included.

A draft conclusions need to be built and should have at least four pillars, he said

The first is, of course, the practical solidarity towards Greece and Cyprus in the face of Turkish provocation.

The second pillar has to do with the EU calling on Turkey to immediately stop all illegal mining activities in the Cypriot EEZ and, of course, to end the remaining provocative actions in the Eastern Mediterranean.

The other two pillars are interrelated and have to do with the carrot, when Turkey has consistently and consistently demonstrated that it means de-escalation, ie any assistance that can be provided to Turkey in this context. And the last one is the stick if Turkey does not show the disposition for practical de-escalation, I repeat, with consistency and continuity,” spokesman Petsas underlined.

According to information coming from Brussels, a third draft may be worked out.

Merkel has so far clearly spoken against sanctions for Turkey. Prior to the Summit, Merkel said that the EU needs to “develop a truly constructive relationship with Turkey despite difficulties.

On his part, PM Mitsotakis said that the “Turkish aggression, whether expressed through unilateral actions or extreme rhetoric, can no longer be tolerated.”

Urging Europe to discuss bravely and sincerely what kind of relationship it really wants to have with Turkey,” Mitsotakis recalled that “Turkish aggression violates the sovereign rights of two EU member states – Greece and Cyprus – and it also “touches on the significant geopolitical interests of all Europe in the Mediterranean.”

“There are only two choices, either the path of dialogue in diplomacy, which must be based on respect of international law, avoidance of unilateral actions and good neighborhood rules, or the path of escalating tension, which sooner or later will inevitably lead to Europe taking measures against Turkey, Mitsotakis stressed.

EU leaders at the Summit are now having dinner and the night is expected to be very long.