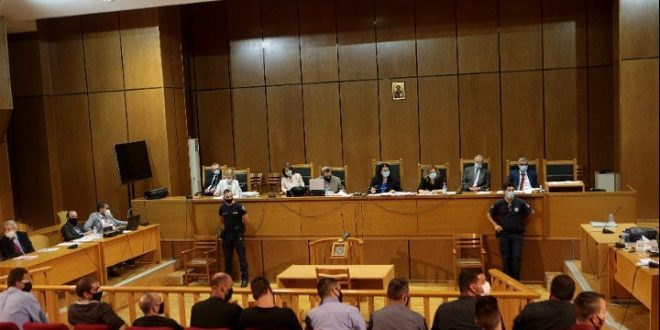 After a marathon session that lasted 13 hours on Wednesday, the Appeals Court in Athens resumes its work in the trial of Golden Dawn at 12;30 noon on Thursday. The session starts with the recommendations of the prosecutor regarding which mitigating circumstances should or should not be admitted in imposing the sentences.

After the verdict on Thursday, defendants’ lawyers laid down mitigating factors for their clients. They all claimed “former decent life” and some also in the period after they were prosecuted.  However, some of the mitigating circumstances brought to court are quite …odd

Many of them claimed further that they have elderly or disable family members to take care of.

The seven leading GD former MPs, convicted for establishing and operating a “criminal organization” disguised as a political party, face sentences ranging from 2 to maximum 15 years in prison.

Those found guilty only of participating in a criminal organization, mitigating circumstances could lower a sentence of five to 10 years to between one and five years.

Upon the announcement of the sentences, many of those convicted may end their day in jail as the court must also decide whether or not their sentences should be suspended.

At the same time, depending on the sentences to be imposed, convicts may remain outside jail until their appeal is tried.

Defendants lawyers are expected to make a brief second statement after the prosecutor’s recommendations have been presented.

The court will then announce its decision concerning the mitigating circumstances and proceed with sentencing.

Once the sentences have been announced, the court has a right to demand that any defendants that are not present be brought before it.

According to media reports, the judges are determined to conclude the procedure today, even if the session will go until the early morning hours of Friday.