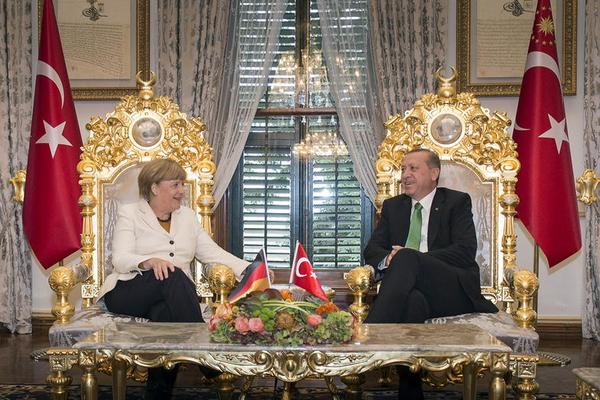 Greece may want to push for sanctions against Turkey at the EU Summit on Thursday but Germany is determined to have her “liebling” ally Recep Tayyip Erdogan prevail with his aggressive and expansion policies. Greece has made clear that with Oruc Reis operating in Greek continental shelf, there can be no dialogue with Turkey.

The European Union is unlikely to launch sanctions against Turkey at its summit starting on Thursday amid a gas dispute in the eastern Mediterranean, a German government source said, Reuters reported on Wednesday afternoon.

Following the latest deployment of seismic research vessel Oruc Reis in the Greek continental shelf on Tuesday, Athens requested to raise the issue at the two-day meeting of EU leaders in Brussels, reuters reported.

Germany does not expect the EU to change its stance on sanctions against Turkey a mere two weeks after the last summit’s decision not to impose punitive measures until further notice.

The EU Summit in September had decided to review the issue in December.

Under the secured protection of Chancellor Angela Merkel, President Erdogan accused Greece and Cyprus of failing to fulfill “promises” made during negotiations within the European Union and NATO and said his country would continue to give them “the response they deserve.”

“Our Oruc Reis has returned to its duty in the Mediterranean,” Erdogan told MPs of his ruling party in a speech in parliament. “We will continue to give the response they deserve on the field, to Greece and the Greek Cypriot administration who have not kept their promises during talks within the EU and NATO platforms.”

He did not elaborate what exactly the promises were but Turkish officials have been accusing Greek officials of engaging in a series of “provocations” despite efforts to revive the so-called exploratory talks between the neighbors that were aimed at resolving disputes and were last held in 2016.

The Turkish Foreign Ministry put down a list of the “Greek provocations,” and also tagged EU and US officials. Among the claims Ankara lists also the visit of the President of the Hellenic Republic to a Greek island [sic!]

Escalatory Steps of Greece in the Eastern Mediterranean and the Aegean Sea since 12 September 2020.@StateDept @eu_eeas @JosepBorrellF@eucopresident@eucouncilhttps://t.co/qdbWwPjMfG