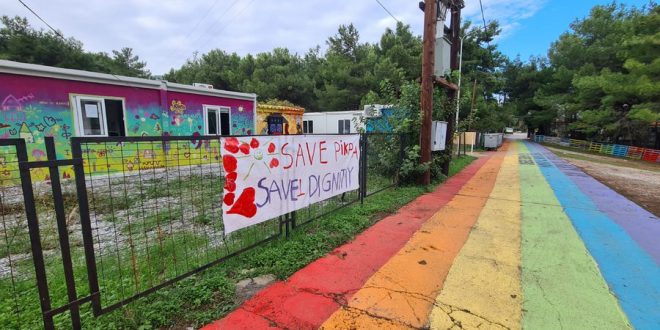 The Migration and Asylum Ministry announced on Thursday that it is shutting down a hosting facility for vulnerable groups of asylum seekers run by the organisation ‘Lesvos Solidarity’ at the PIKPA children’s camp at Neapolis, Mytilene.

The 74 asylum seekers will be safely transferred to the recognised municipal hosting facility of Kara Tepe for vulnerable people, which is operating under the surveillance of the UNCHR.

It is noted that the specific hosting facility currently has 524 vacant places.

A total of 21 unaccompanied children that were hosted at the PIKPA camp were transferred to other special facilities for unacconpanied childern in mainland Greece.

The First Reception Agency delivered the transfer decision on Thursday. “We expect the NGO that is managing the site to cooperate for the safe transfer of the beneficiaries,” the ministry said, noting that the PIKPA camp was public land and had remained under occupation in the last years “with the unofficial facility operating without any control”.

Completing the transfer of the 74 people hosted will allow the land land to be returned to the state to be used in the interest of the local community, the announcement added.

NGOs have been shocked about the shut down and the transfer of the vulnerable people to Kara Tepe camp that gets flooded by every single rainfall.

Shocking news in #Lesbos: vulnerable people being ordered to move from the safety of #Pikpa without forewarning. Meanwhile thousands remain trapped in #Moria 2.0 in awful conditions. This is so shameful @migrationgreece. Is this your new fresh start @ylvajohansson @vonderleyen? pic.twitter.com/l6MXwIGesf

#breaking: authorities are trying to evacuate #PIKPA shelter in #Lesvos now. A wrong decision carried out in a cruel way as residents didn’t now receive any official warning.@amnesty opposes the decision. We urge #Greece to protect the rights and dignity of people.#savepikpa https://t.co/RKZRpySOcD