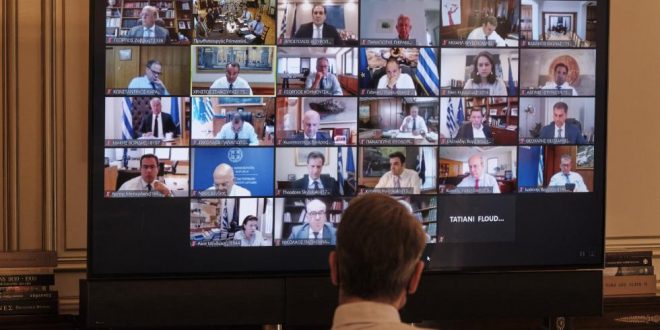 Gov’t reshuffle to be announced at 12 noon

January 4, 2021 Greece, Politics Comments Off on Gov’t reshuffle to be announced at 12 noon 779 Views

Prime Minister Kyrakios Mitsotakis has decided to proceed with a government reshuffle on Monday, the first working day of the new year. There is little information about how extensive the reshuffle that will be announced at 12 o’ clock noon will be.

According to media speculation, key ministers like the ones in Foreign Affairs, Defense, Finance and possibly also in Health are expected to remain in their position.
Changes are to take place in the ministries of Interior, Labor, Agriculture, Development, while expected is also change in Tourism and others.

Some ministers are to move to other ministries and some will go home. At the same time, “new blood” is supposed to come from the New Democracy parliamentary group.

Media have claimed that several ministers were set in the “cold” by the Prime Minister and were excluded from  crucial decisions, not to mention that they were not even informed about them. One of these ministers announced on Saturday morning the upcoming gradual opening of retail stores. Two hours later the government spokesman announced new strict lockdown.

Scenarios about the cabinet reshuffle were strong in the last two days, and the crucial phone calls must have taken place in the last hours.

PS We have a saying here that aspiring ministers “have a new suit.” The question is how the new ministers have come to a new suit when the click away was stopped on Sunday due to the new lockdown and courier services are overwhelmed until Easter or something…