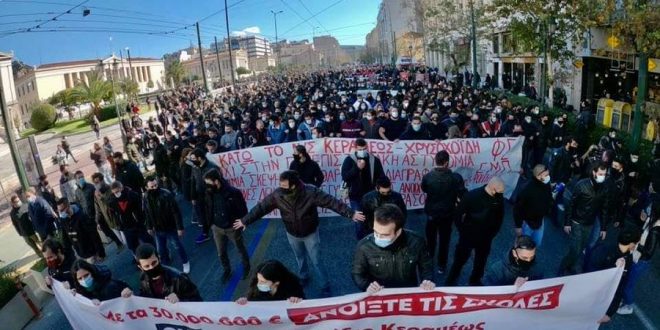 Greek Police (ELAS) is forming a case file for the mass students’ protest rally in downtown Athens on Thursday. The file contains charges that the rally violated the laws forbidding crowding and the recent law banning public gatherings with over 100 people.

Furthermore, there was no official announcement by the organizers to the police about the rally and no responsible organizers were appointed.

The case file will be forwarded to the prosecutor’s office as soon as it is completed.

Some 4,000 students, teachers, parents and members of the public sector union ADEDY marched through the center of Athens on Thursday to protest anti-democratic and authoritarian government measures for universities.

In contrast to previous practices, there was no strong police presence at the rally on Thursday and police refrained from intervening to disperse the crowd or issue 300-euros fines.

PS And the exact purpose of the case file is ….? Bureaucratic obligations?