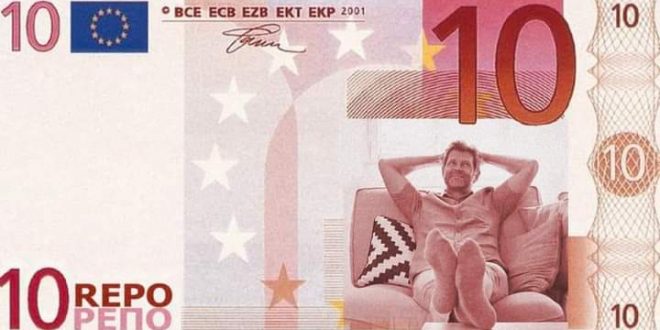 Greece’s new “currency”: REPO or Day-Off instead of payment for overtime work

It’s not a I-Owe-You, it’s not a Greek made “cryptocurrency”. It’s just unpaid work that will be awarded with “Day-Off” instead of payment. This is just a part of the controversial new labor law that will send workers unions to the streets on upcoming Thursday.

Labor Minister Costis Hatzidakis claimed that “workers’ ncome will not decrease, it’s just that they receive days off.”

Now Greece’s workers wonder whether this payment scheme of “days off” will expand also to other economy sectors so that people can pay their purchases in supermarkets and retail store and pay their moobile and utility bills, taxes and rent with “days off” instead of euros.

In an effort to persuade that the day off scheme is in favor of the worker, the Minister told Contra TV the other day: “If they want to people with work overtime Monday to Thursday and have day off on Friday.”

HE claimed again that this “practice is all over Europe” but forgot to mention that in countries where it is implemented the employee has tha alternative: day-off or payment.

In the ideal bubble world of the Minister who spent most of his working life as party official, MEP or MP, it is easy to make laws that have little to do with the real labor market.

Note the “Greek tradition” of employers to demand back whole or part of workers’ Christmas/Easter bonus, and the recent practice that they claimed from their workers in lockdown suspension contracts part of the state aid.

At the same time, imagine a business where all workers to overtime Mon-Thu and they enjoy day-off on Friday and the business is closed.

Some even proposed payment with “Likes”

Greeks are right to be suspicious about “rules in workers’ favor” as everybody knows how easy it is break laws and rules, especially when it comes to workers’ rights.