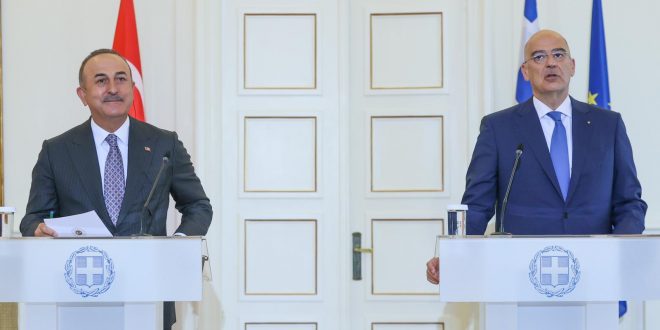 Mitsotakis and Erdogan to hold a meeting on June 14

Greek Prime Minister Kyriakos Mitsotakis and Turkish President Recep Tayyip Erdogan will hold a meeting on June 14 at the sidelines of the NATO Summit in Brussels. This was agreed during an official visit of Turkish foreign minister Mevlut Cavusoglu in Athens where he had talks with the prime minister and his Greek counterpart Nikos Dendias.

Dendias said that the two sides have agreed on a list of economic cooperation programs as well as on the mutual recognition of Covid-19 vaccination certificates.

Cavusoglu said that Athens and Ankara both seek to “increase cooperation” and find solutions to their problems “on the basis of international law and shared interests.”

He confirmed that Mitsotakis-Erdogan meeting.

The joint presser was without unexpected surprises like the one in Ankara last month, where the two ministers got involved in a war of words right in front of the cameras.

Both ministers posted pictures of their meeting on social media.

Discussed our bilateral relations and regional issues w/FM @NikosDendias of #Greece.
-Decided to mutually recognize COVID-19 vaccine certificates.
-Agreed to continue our dialogue without interruption to solve the issues between our countries. pic.twitter.com/bd4IiJj7cu

PS and we all live happily ever after until the next crisis….