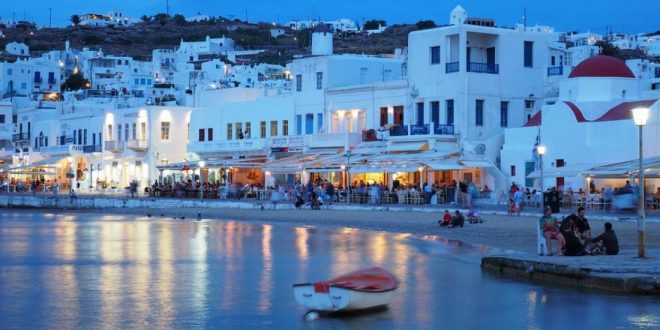 Greece’s Civil Protection announced on Saturday a so-called mini lockdown on the island of Mykonos due to an “alarming coronavirus outbreak in the last 24 hours, multiple outbreaks and clusters” as the relevant statement said characteristically.

The restrictions go into force from 6 p.m. on Saturday, July 17, and until 6 a.m. on Monday, July 26, 2021, with intermediate reassessment of the epidemiological situation.

The restriction refer to:

1.Curfew from 1 o’ clock in the morning until 6 a.m., with the exception for work or health reasons.

With reference to the illegal parties in rented villas, the Civil Protection recalls that on Mykonos as well as across the whole Greek territory, it is forbidden to hold any kind of events that are held in any kind of exchange with the physical presence of a crowd of more than twenty (20) people in private, non-professional space.

The administrative fine in case of violation amounts from 50,000 to 200,000 euros for the lessee or the concessionaire of the private, non-professional space, in which the said event took place or takes place.

The Civil Protection calls on the residents, the visitors and the professionals on Mykonos to observe the measures, as well as the authorities of the island to immediately activate the information and control mechanisms of their observance, so that soon the spread of the coronavirus is controlled and limited and the situation returns to normal.

Professionals and residents on the cosmopolitan island and top tourist destination in the country are in shock and say that the measures are catastrophic for the local economy and society.

A few hours after the announcement, entrepreneurs, workers, residents and local authorities reportedly gathered for an extraordinary meeting Saturday afternoon to decide how they will react to the measures.

They declared ready to go on the streets, a decision is still due.
Speaking to media, the mayor of the island Konstantinos Koukas described the restrictions as “misplaced and punitive.”

Coronavirus outbreaks on the Greek islands

The Civil Protection decision comes after an increase of coronavirus infections on several island destinations.

It should be recalled that on Thursday authorities placed Mykonos, municipalities of Iiton, Thiras and Paros as well as the cities of Heraklio and Rethymno on Crete at a higher risk level, from Yellow to Orange (Level 3).

According to the daily infections bulletin on Friday, 40 cases were recorded on Mykonos, 22 on Paros, 15 on Santorini, 112 in Heraklo nad 91 in Rethymno.

According to media, similar restrictions may be imposed also on other islands if there is no stabilization of the epidemiological load.