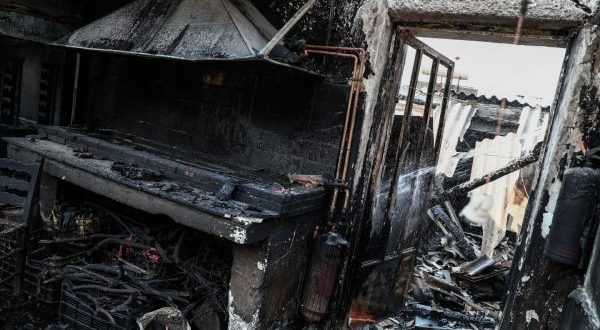 “Houses will be rebuilt, the forest will recover in time,” says Greek PM on Varimpompi fire disaster (picts)

“The houses will be rebuilt, the forest will recover in time…,” said Greece’s Prime Minister Kyriakos Mitsotakis during a brief visit to the outskirts of Varimpompi fire that burned down on Tuesday.

“We were up against an extremely difficult fire in conditions of extreme hot weather. The most nightmarish fires are those that occur in forests around urban areas,” he said summarizing the disaster that took place just 20 km away from the center of Greek capital and left hundreds of people homeless, burned down estimated some 200 homes and unknown number -for now – of dense forest acres, killed animals and wildlife, destroying businesses and life accomplishments.

Interior view of burnt out restaurant as a wildfire continues to rage at Varympompi suburb north of Athens in Greece on August 4, 2021. #Greece #greecefires #βαρυμπομπη #Πυρκαγιά #forestfires pic.twitter.com/UZQlb8w7hx

“I hold on to the fact that, thank God, we have not until now had any losses of human life as positive and that the evacuation system worked in an exemplary fashion. Our critical infrastructure has held up,” Mitsotakis added.

A series of devastating photos from the fire that started in Varibobi. Location from photos were taken: Nea Kifisia #φωτιες pic.twitter.com/OHDi2ZteFK

He stressed that the work to record the damage will begin immediately: “The houses will be rebuilt, the forest will recover in time…but there are still difficult times ahead. We have some days yet of the heatwave and then the winds will begin, in which case I ask everyone to remain on absolute alert so that the damage done from now on is as little as possible.”

He thanked the fire fighters, the police officers deployed in the area and the volunteers for their “selfless efforts against an extremely difficult situation.”

Equally nonchalant where late on Tuesday the Minister for Citizen Protection Michalis Chrysochoidis and deputy minister for crisis management and head of Civil Protection Nikos Hardalias. 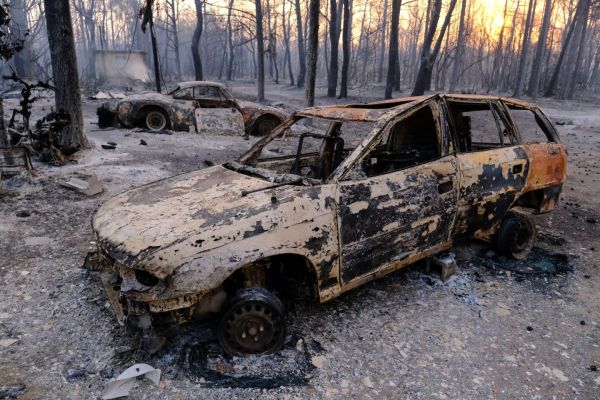 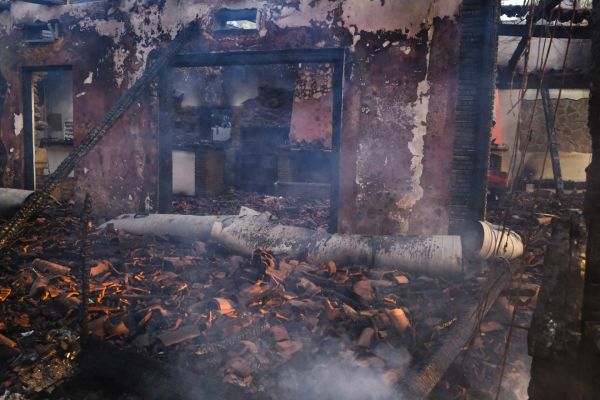 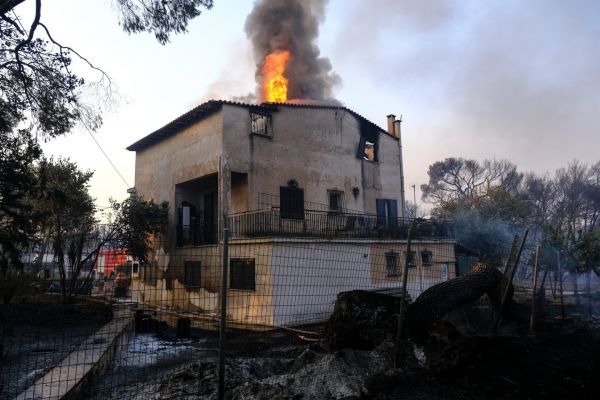 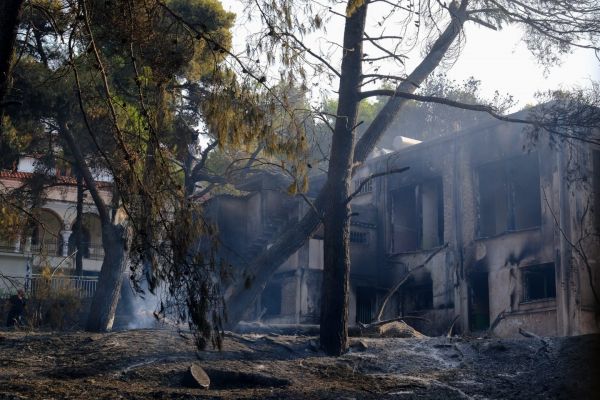 They blamed the climate change for the big fire that was burning for quite long without intervention of aerial means and thus by 2 Beaufort and practically congratulated themselves for …successfully dealing with the disaster.

Chrysochoidis said that despite the unprecedented heatwave in Greece, “the state was prepared for the climate change and acted in a systematic way to evacuate endangered villages.”

Hardalias said among others that despite the threat of the fire in Varibobi to power stations, the danger was averted. In addition,  Culture Minister Lina Mendoni had provided advice on removing the most valuable objects from the former royal summer palace of Tatoi, north of the fire front, which is a national park, he said.

“This fire began at 13.25 in Ano Varybobi, on Mt. Parnitha, when the prevailing heatwave conditions created temperatures of 45C, humidity of under 10%, and midday winds with a velocity of 6 on the Beaufort scale,” he stressed.

A total of 520 firefighters, 17 terrain teams, 150 fire trucks, 9 helicopters and 7 aircraft operated in the area, Hardalias said adding that the Fire Brigades were assisted by the army, the police – including 305 policemen and 3 riot police teams -, volunteers and local authorities.

A total of 315 people were transported away from the fire.

A total of 81 fires broke out in Greece in the last 24 hours and there were 40 active fire fronts, Hardalias said at 9 pm on Tuesday.

Hardalias announced Wednesday noon that 94 houses have burned down in Varimpompi and 12,000 acres of land were destroyed.

Many residents also in surrounding suburbs left by themselves after they received messages to evacuate, some of them on foot.

Air pollution in the Attica basin hit red with a heavy cloud of harmful fine particles PM2,5 to have covered many suburbs also in the south and authorities urging people to stay inside.

Locals in outrage told media on Wednesday morning in live transmission that “houses were burning but there was no fire service around.”

Local authorities in Evia and Macedonia were calling for aerial means and complained that not a single helicopter or Canadair aircraft assisted against the infernos burning down forests and houses.

Athens wasn’t the only place on fire, this is what the Evia fire looked like yesterday https://t.co/2V1HWBBrY6

According to latest information 12 settlements were evacuated in Evia, 150 houses were burned down and 20,000 acres of forest land were destroyed.

PS but we are cool as every leader should be in times of crises and disasters, like in a Hollywood film. He reminded me Morgan Freeman in Deep Impact after the the collision of the earth with a comet was averted.