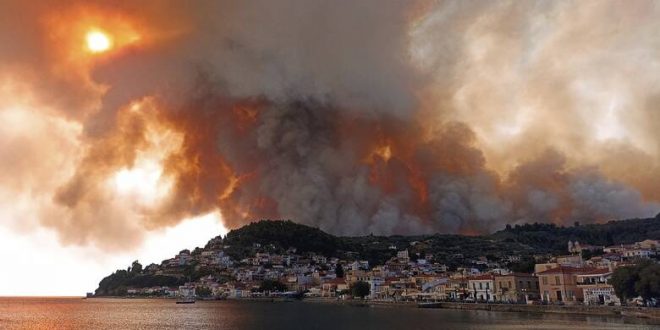 The Energy Regulatory Authority must revoke the licenses for wind turbines it has approved for Istiea, in fire-devastated northern Evia, Environment & Energy Minsiter Kostas Skrekas demanded in a letter on Monday.

In a letter to the authority’s president, Athanassios Dagoumas, the minister expressed his surprise at the decision, stressing that the government had “explicitly promised that it will not intervene in fire-devasted areas until the restitution committee submits its plans.”

“After the catastrophic fires that hit Northern Evia last month, the government immediately set up a Committee for the Reconstruction of the fire-affected areas headed by Stavros Beno. The Reconstruction Committee is expected in the next period to submit a comprehensive proposal for the spatial, road and urban planning of the settlements in Evia that were affected, in the context of their restoration and protection works,” the minister stated in his letter.

He added that “despite the explicit commitment of the government that no intervention will be made in the fire-affected areas until the submission of the Commission’s plan, I was surprised to learn that the Energy Regulatory Authority granted permission for the installation of 13 wind turbines on Mount Telethrio in the Municipality of Istiaia-Edipsos. for a period of 25 years.”

The minister called on the president of Energy Rgulatory Authority to revoke the decision for any permits and refrain from issuing new ones.

“The Ministry of Environment and Energy will immediately submit legislative regulation for the suspension of the validity of the licenses issued recently and the suspension of the issuance of new licenses, until the completion of the Reconstruction plan of the fire-affected areas of Northern Evia,” minister Skrekas stressed in his letter.