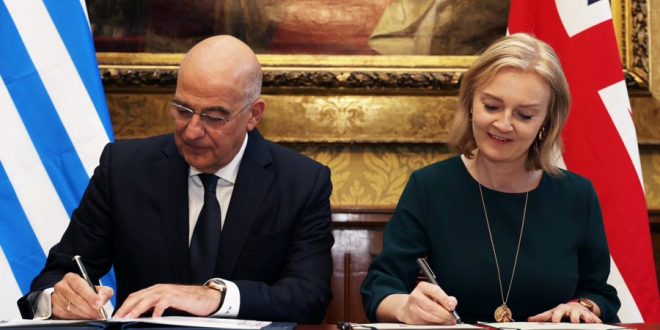 Foreign Minister Nikos Dendias and Foreign Secretary Elizabeth Truss signed a Memorandum of Understanding (MoU) on Strategic Bilateral Framework between Greece and the United Kingdom in London on Monday.

No details of the MoU were given to the press other than the signed agreement enables individual agreements to be reached in various fields, such as foreign policy, defense, trade, investment, health, education, tourism and maritime affairs.

In statements to the press after the signature ceremony, Dendias said that he extensively discussed with Truss,
“issues related to defense but also beyond that, on the situation in the Balkans, as well as on investment and education issues, more generally on the overall scope of Greek-British relations; especially in view of Prime Minister Kyriakos Mitsotakis’ visit to the United Kingdom in mid-November.”

He added that they “were also able to look at the problems we face on the Cyprus issue, problems in the Eastern Mediterranean, and problems related to the implementation of the Law of the Sea. We had the opportunity to sign a Greek-British Agreement that covers all fields, defense, trade, educational relations, anything that can be conceived to be of interest to both countries.”

Dendias stressed that the agreement further develops the mutual relations and prove that the withdrawal of the United Kingdom from the European Union does not in any way mean a decrease in its relations with Greece. Instead, it is an opportunity for closer, deeper, more sincere bilateral relations.”

Dendias and Truss posted on their social media accounts:

I signed with #UK Foreign Secretary @trussliz #MoU on Strategic Bilateral Framework between 🇬🇷🇬🇧. #Greece and the #UK open a new chapter in their post-Brexit partnership deepening their cooperation on a wide range of areas, including foreign policy and defence. pic.twitter.com/OSGRAT33q2

🇬🇧 We are strengthening links with friends across Europe and with our NATO allies, forging a network of liberty across the 🌎 pic.twitter.com/kThkaTXDYC

The British Foreign Office reportedly noted that “the United Kingdom-Greece Strategic Bilateral Framework is based on the already strong existing relationship between the United Kingdom and Greece.”

It also stressed that “the two countries are committed to working together to promote stability and security.” Finally, it points out that this agreement enables individual agreements to be reached in various fields, such as foreign policy, defense, trade, investment, health, education, tourism and maritime affairs.”