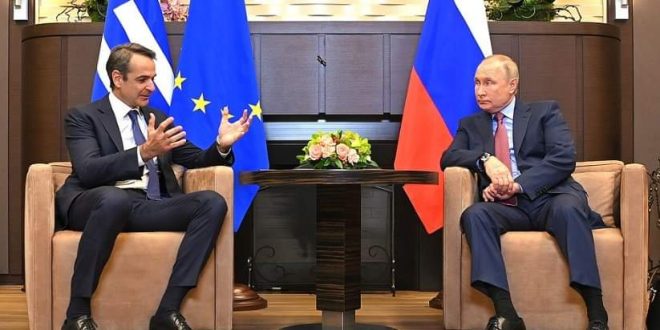 Greek Prime Minister Kyriakos Mitsotakis and Russian President Vladimir Putin met in the president’s house in Sochi on Wednesday and their talks focused on trade, energy, the Balkans and the Eastern Mediterranean. “There is room for improvement in Greek-Russian relations in economic affairs, bilateral trade and tourism,” the Greek PM, who is officially visiting the country, has said.

Among others, he spoke of Greek-Russian Year of History 2021 that had been an impetus for closer cooperation on all levels

He noted that Greece’s economy was growing rapidly as the pandemic draws to a close.

The Greek premier highlighted Russia’s important role in regional affairs due to its position as a permanent member of the UN Security Council, saying the meeting was an opportunity to exchange views on issues of regional security.

Mitsotakis referred to Russia’s contribution to the Greek Revolution of 1821 exactly 200 years ago, which led to the foundation of the modern Greek state. He added that Greek-Russian Year of History 2021 had been an impetus for closer cooperation on all levels

On his part, Vladimir Putin highlighted the special bond between the two countries and the fact that the Greece-Russia Year of History coincided with the bicentennial of the Greek Revolution, in which Russia helped the Greek people accomplish their goals.

He expressed satisfaction with the rate of growth of bilateral economic and trade ties, noting that the volume of trade transactions had this year returned to pre-pandemic levels, and said that the talks with Mitsotakis will cover a broader range of issues.

At the joint press conference that followed the meeting, Putin said in the first nine months of the year, bilateral trade increased  by 56%. Russian companies have a strong interest for investing in Greece and “we expect the same response from the respective Greek ones.”

He added that Russia covers more than 40% of Greece’s energy needs. “Russia is fulfilling its obligations to Greece and the EU and will continue its uninterrupted supply of natural gas”

On Cyprus, he reiterated that Russia supports the solution of a bi-zonal and bi-communal federation.

Mitsotakis thanked Russia for sending firemen to Greece last summer to help with the devastating wildfires that raged for days, despite the country facing itself large blazes in Siberia

On energy, Mitsotakis said that Russia “has proven to be a reliable supplier of gas to Greece, just as Greece is a reliable partner.”

“It is important that any [price] adjustments do not deviate significantly from the existing agreement.”

Commenting on EU-Russian relations, the Greek PM said it is important to continue the dialogue. “I recognize the great challenges, I recognize the need to always keep the channels of communication open. Russia is part of the European Security architecture,” he said.

He also thanked Russia for its position on the Cyprus issue.