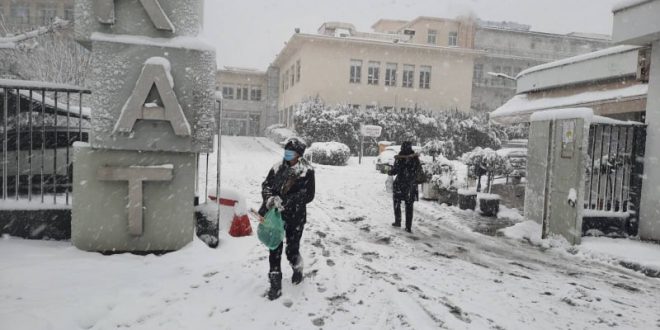 Operation of public and private sector in Attica & Crete Jan 27

Normalcy will partly return to Attica and Crete tomorrow Thursday, 27. January 2022, after two days of “obligatory holiday” due to snow weather Elpis.

According to an announcement by the government spokesman the instructions about the operation of the public and private sector as well as the retail and schools are reportedly the following:

Delivery and courier services are not allowed

Strong recommendation for teleworking in the private sector where possible. Public sector will operate also with teleworking depending on the needs of the public services including possible problems to access services.

Schools will operate with distance learning only.

No operation of courts

The Greek Banks Association issued a statement saying that banks will operate again on Jan 27, however, it advises customers to visit a branch after previous telephone contact.

Snow weather ELPIS created a chaos primarily in the Greek capital Athens as authorities in charge failed to cope with the situation.

Roads in many suburbs of Athens and areas in Attica remain inaccessible due to frozen snow, abandoned cars and fallen trees,  while low temperatures early morning and late at night turn the asphalt and the pavements into ice-skating pistes. Still over 3,000 household are without electricity on Wednesday night and the problem is not expected to be solved by early Thursday morning.

Due to frost at night and early morning in Athens, buses and trolley buses are been gradually withdrawn from traffic from  9 p.m. Wednesday and will resume operation after 6 a.m on Thursday, the managing company said in a statement. Check here in Greek which lines are affected.