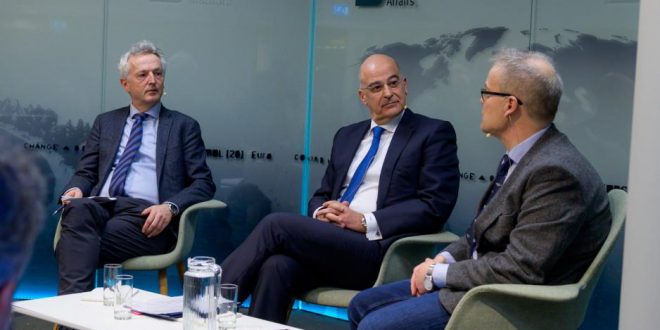 A heated debate between Greece’s Foreign Minister Nikos Dendias and Turkey’s ambassador to Norway, Fazli Çorman took place in front of a stunned audience on Wednesday during a lecture by the Greek FM at the Norwegian Institute of International Affairs (NUPI) in Oslo.

During his official visit to Oslo, Dendias was holding a lecture at NUPI on “Implementing the UN Convention on the Law of the Sea: the Aegean Sea and the Eastern Mediterranean as a case study.”

Among others, the Greek FM spoke of Greece’s alliances with countries in the Mediterranean region and Turkey’s refusal to adhere to UNCLOS and to recognize Greece’s right to extend its territorial waters, threatening Greece with war should it do so.

“Challenging the implementation of UNCLOS in the Eastern Mediterranean seriously affects peace and security in our region,” Dendias noted.

He added that Greece’s position is that it is willing to negotiate the delimitation of the continental shelf and the Exclusive Economic Zone, “and, failing an agreement bilaterally, to submit our difference to the Court.”

Criticizing Turkey for disputing the legal right of the Greek islands to have a continental shelf and an Exclusive Economic Zone (EEZ) and denying the validity of the UN Convention on the Law of the Sea, Dendias said:

“The truth is that the differences between Greece and Turkey are solvable. Under one precondition: That Turkey comes to the 21st century. If Turkey stays in the 19th Century, if Turkey stays in the way that Suleiman the Magnificent was conducting affairs by having the armadas around the Mediterranean, then this is a no go.”

This prompted the Turkish Ambassador to jump up from his seat in the audience and accuse Greece of being responsible for all these actions of Ankara.

“The Aegean Sea has two sides; there is a land mass on the other side that you are forgetting, that is called Asia Minor, you may remember it from history.” Ambassador Çorman said adding: “You also failed to mention the demilitarized status of some of the islands. That is also one of the issues that we would like to discuss when it is about International Law and application of it.”

Dendias mentioned also the “casus belli” with which Turkey has been threatening Greece with war since 1995 if Athens exercises its legal right to extend its territorial waters to 12 nautical miles. The head of Greek diplomacy stressed that with its casus belli, Turkey is violating fundamental principles of the UN Charter.

Corman responded that the Turkish-Libyan agreement “was also a consequence of something that you also know very well.”

“And the casus belli declaration by the Turkish Grand National Assembly was also a consequence that Greece was telling that they will go ahead unilaterally declaring the continental waters as 12 miles. And this would practically ‘lock’ Turkish waters, Turkey’s ability to reach international waters, and Turkey will be locked into its own territorial waters. That is what you are imposing, or you are trying to tell Turkey,” the ambassador said.

Dendias retorted that Turkey has subscribed to the UN Charter which totally prohibits the use of force and the threat of the use of force. “Isn’t a casus belli exactly what is prohibited by the UN Charter?… Is that really an invitation to a dialogue? Or is it a pure threat -and I could use much harder words than ‘pure threat?’”

The lecture and the heated debate in english at NUPI video: