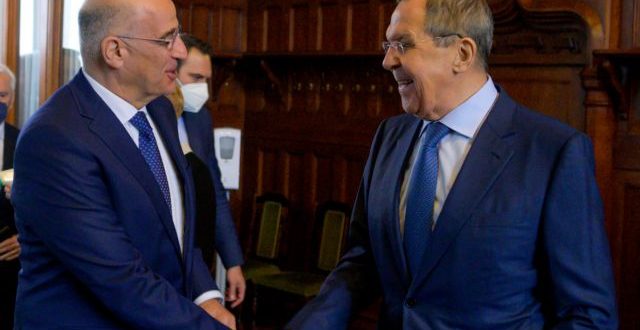 “A conflict in Ukraine will have no winners,” Greek FM Dendias tells Russian counterpart Lavrov

“A conflict in Ukraine will have no winner. We would all lose out,” Greek Foreign Minister Nikos Dendias told his Russian counterpart Sergei Lavrov during a meeting in Moscow on Friday. The Russian FM blamed the NATO for the latest developments in Ukraine, citing violations of OSCE agreements.

“We have looked at a number of regional issues. We stressed that there is no alternative to Ukraine other than the Minsk agreements “, Lavrov pointed out,

Dendias stressed the need for an immediate de-escalation of the tension in Ukraine adding that “Greece is listerning carefully to Russia’s concern.

The Greek FM also raised the issue of Turkey’s aggression, including its threat of war (casus belli) against Greece if the country proceeds with its legal right to extend its territorial waters.

“Greece favors a constructive dialogue [with Turkey]; it is however prepared to defend its national sovereignty from any threat,” he said.

He added that “Greece is in favour of maintaining peace, stability and security, but also of a constructive dialogue based always on international law, as well as on the law of the sea and on the basis of the fundamental principles of the Charter of the United Nations.”

The Russian FM said that Moscow attaches “special value to our dialogue on regional and international affairs,” listing current issues such as the Russian Security Assistance Initiative, Ukraine and the East. Mediterranean, the Balkans, Transcaucasia, the Middle East and North Africa.”

He noted that “in all these directions our Greek friends have their own position. We are interested in taking your interests into account. We are pleased and ready to discuss any issue of interest to you.”

Lavrov described Friday’s meeting as “a good opportunity to look at how what has been agreed at the level of our leaders is being implemented,” referring to the development of “trade and economic relations, investment, energy, transport and communications and of course tourism and ensuring the epidemiological security of citizens.”