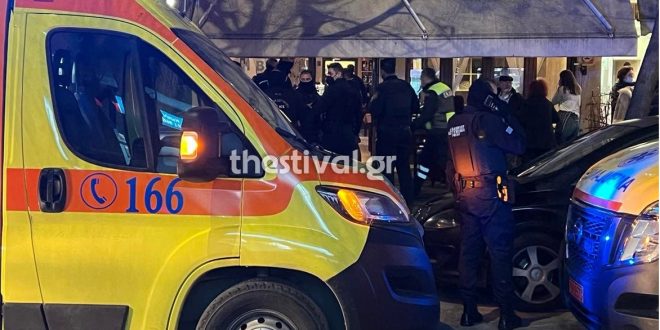 Femicide in Thessaloniki: Woman shot by ex partner, a boxer with far-right background

Femicide in Thessaloniki: A 41-year-old woman was shot and seriously injured by her former partner inside her cafe in the city in northern Greece on Wednesday night. The victim died in the hospital on Thursday morning. The perpetrator, a well known boxer with links to the far-right front, committed suicide right after he shot his victim.

The 42-year-old perpetrator entered the restaurant around 8 o’ clock with a short-barrelled gun, that apparently nobody noticed. he approached the victim in the kitchen and fired.

The woman was injured in the abdomen, then the man turned the gun at himself putting an end to his life.

The incident took place in front of the eyes of one the victim’s daughters, a 20-year-old, was also injured from the lead.

Friends of the victim told media that the man was often threatening the former partner and arguments were often during their relationship.

The mother of three had recently taken restrain order against him.

A friend told local media thestival.gr, that the victim had recently broke up with him, while he had threatened in the past that if she leaves him, he would kill her. The bully was creating troubles while customers were in the cafe, he was arrested by police for this reason once.

The perpetrator was an MMA champion and had a martial arts school on the island of Chios He was living in Thessaloniki in recent years. Media report that he was a member of neo-nazi Golden Dawn and was active in their actions. Greeks have posted pictures on social media showing him at a raid attempt of the Greek Parliament.

Short before the fatal incident, the man had reportedly posted on social media:

“Getting closer to the last race. The only thing I was never afraid of was death. I do not know what you are doing.”

It looks as if the bully was not threatening only his former partner, as other women have, meanwhile, posted screen shots of threatening messages by him to them. Som them posted that they were bullied and threatened by him because they were engaged in favor of refugees and migrants.

41-year-old Vicky is one more of the many femicide victims in Greece.

Meanwhile in Peloponnese, police investigates whether the former husband of a mother of three is behind the murder of her, her second husband and their two toddlers. The brutal killing took place also on Wednesday, almost at the same time when the femicide in Thessaloniki took place.