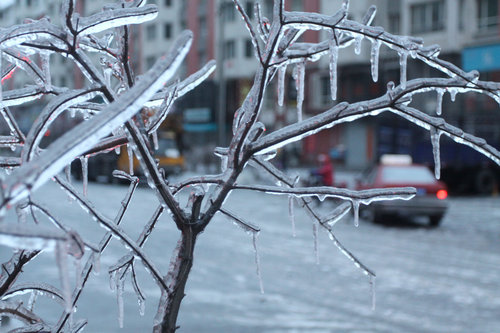 A cold weather front is forecast to hit Greece and bring temperatures down by 6 to 9 degrees Celsius. The cold weather will be accompanied also by snow falls in the mountains but also in lower altitudes, the Greek National Meteorological Service EMY said on Tuesday.

The cold weather front is forecast to reach the country on Friday, March 18. 2022.

Note: This is not a weather warning announcement by the ” rel=”noopener” target=”_blank”>EMY.

In Thrace, the islands of the eastern Aegean and the Dodecanese a few temporary clouds are forecast. In the rest of the country increased cloudiness with local rainfalls mainly in the eastern mainland and northern Crete.

Snow will fall in the mountains, in semi-mountainous areas in
central and northern Greece as well as in areas of Macedonia with
lower altitude.

Wind: EastNorthEast 5-7 Beaufort, in the seas locally up to 8 B and in the south gradually up to 9 B.

Temperature will drop across the country and the decrease will be particularly noticeable in the central and north where its maximum value will not exceed 9-10 degrees Celsius.

Frost in places on the mainland in the morning and in the evening.

Local clouds intermittently increase in the eastern mainland,
the islands of the northern Aegean, Evia, the Cyclades and Crete,
where there will be light rain or sleet.

Weak snowfalls in mountainous and semi-mountainous areas as well as in areas in the central and north with lower altitude.

Temperature will drop further and will fluctuate at low for the seasonal levels with its maximum value in central and north
to not exceed 7-8 degrees Celsius and 10-12 c in the rest of the country.

Frost in the north, very strong in place in the mainland in the morning and in the evening.

Cloudy skies at intervals increase in the eastern and southern country where there will be local rain or sleet, while snow will fall on mountainous and semi-mountainous as well as in areas of Central Greece with lower altitude.

Wind: NorthEast 5-7 Beaufort and in the Aegean locally 8 B.

Temperature will remain low for the season.

Strong frost in areas in the North in the morning and in the evening.

Temperature will slowly start to rise on Tuesday, Mar 21.

On the bright side, the north winds will prevent the Sahara Dust that is currently covering western and central Europe  to reach Greece.