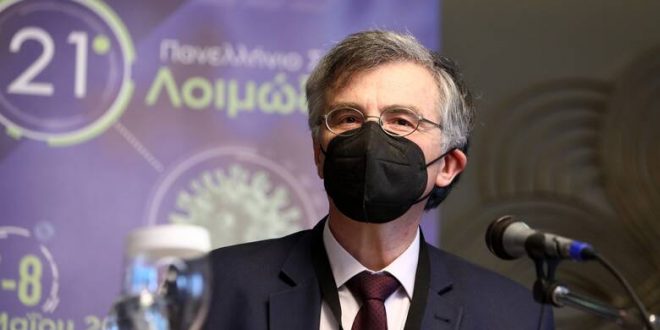 “At least 39,000 deaths were avoided through the vaccination.” Greece’s top epidemiologist Sotiris Tsiodras said on Thursday and did not rule out a “possible new dangerous mutation” of Covid-19. At the same time, another professor warned of multiple-drugs resistant germs in the Intensive Care Units of public hospitals in Greek capital Athens and blamed the focus on Covid-19 only in the last two years.

“About 39,000 people have been saved by being vaccinated against the coronavirus while the three doses have a clearly higher effect than the two doses.”

Speaking at the 21st Panhellenic Conference on Infections,Tsiodras said “about 39,000 people have been saved by being vaccinated against the coronavirus, while the three doses have a clearly higher effect than the two doses.”

According to Tsiodras who is also the chairman of the Greek Infections Society that organized the Conference, “the hybrid immunity that has been achieved in Greece and in Europe, that is, vaccination and natural disease, in combination with the summer season, will help us control and reduce the epidemic after the autumn.”

Saying that “the future can not be predicted,” Tsiodras stressed that “it will be judged by the vaccines and the possibility of the virus escaping from them.”

He added that the distribution of vaccines was not done in a homogeneous way [Africa and other countries] saying that this is a fact that allows the emergence of new mutations. “Obviously, the appearance of new mutations cannot be ruled out.”

At the same conference, Professor Nikolos Sypsas reportedly warned of “infections inside hospitals, the next major public health problem.”

Sypsas spoke of multiole-drug-resistant germs like Candida auris,, a fungus found in the Intensive Care Units of public hospitals in Athens. A significant proportion of deaths are due to this problem, he claimed.

The people in charge of dealing with this problem left their duties and only dealt with Covid-19. Surveillance was lost during the pandemic. A significant proportion of deaths are due to this problem, the professor claimed.

Sypsas stressed that it is certain that the death rate of Covid-19 patients is due to the highly resistant germs from which they became infected.

He concluded that the British Health Commission predicts that in 2050 the leading cause of death worldwide will be infections caused by highly resistant germs.

Saccharomyces Candida auris is mostly acquired in hospitals by patients with weakened immune systems. C. auris can cause invasive candidiasis (fungemia) in which the bloodstream, the central nervous system, and internal organs are infected. It has attracted widespread attention because of its multiple drug resistance. Treatment is also complicated because it is easily misidentified as other Candida species.