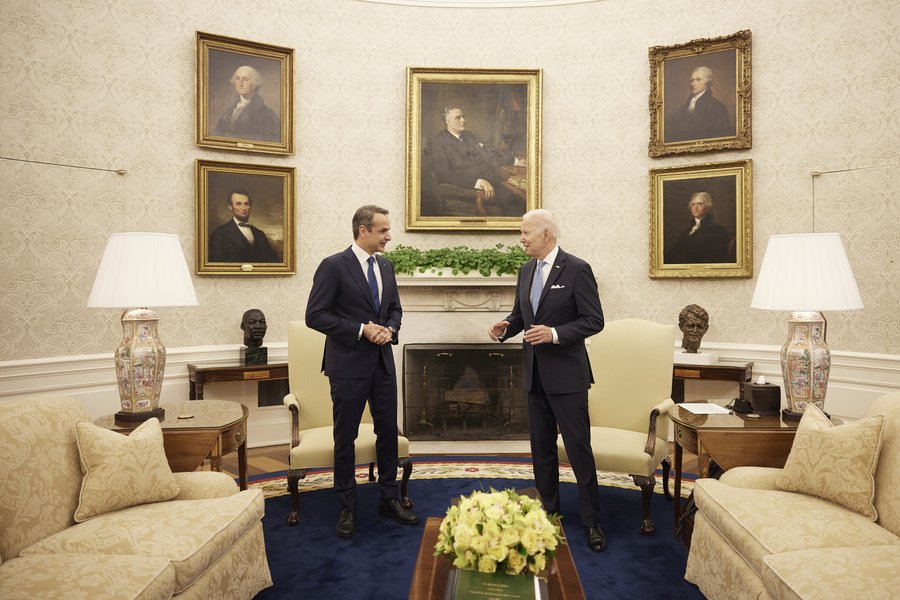 Prime Minister Kyriakos Mitsotakis confirmed that Greece is eyeing the purchase of advanced US-built F-35 fighter jets and that a leading American defense contractor is seeking to invest in the country’s aerospace industry.

“We will launch the process for the acquisition of a squadron of F-35 aircraft, and we do hope to be able to add this fantastic plane to the Greek Air Force before the end of this decade. And I’m happy that on Friday, Lockheed Martin officially expressed its interest in investing in Hellenic aerospace,” Mitsotakis said at the opening of a reception following a meeting at the Oval Office with US President Joe Biden. 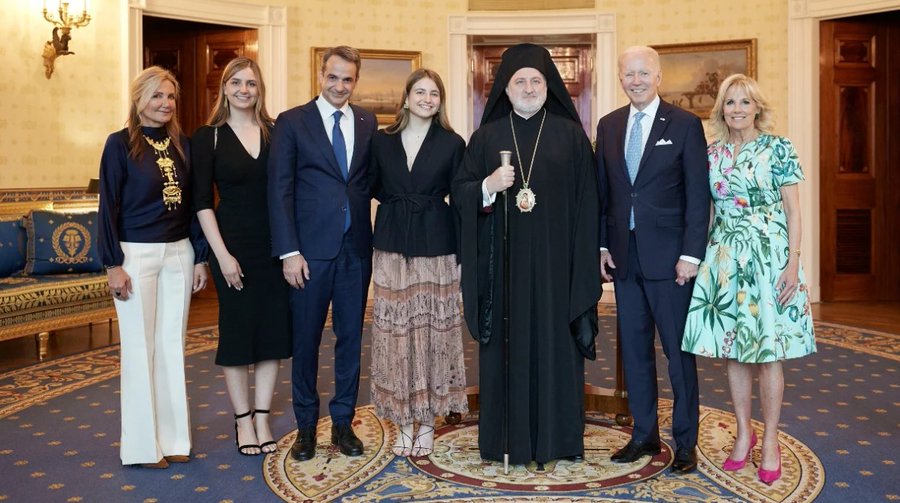 “Our two nations are working together across the board on climate and energy, on trade and investment, on defense and disaster response, and so much more,” Biden said in his speech to the gathering at the White House’s East Room.

“It’s no exaggeration to say that today our friendship and partnership and our alliance is closer and stronger than it has ever been,” he said. “We had a great conversation. And the dangerous part for you all is we like one another a lot.”

Talks between Mitsotakis and Biden focused on the Ukrainian issue and the united western front against the Russian invasion and how the USA will contribute in practice to make Europe independent from the Russian gas.

President Joe Biden reiterated praise for Greece’s stance on the war in Ukraine, thanking Mitsotakis for the “moral courage and clarity you have shown from the very beginning of this crisis: speaking out immediately to condemn Russia’s aggression, welcoming Ukrainian refugees, being a bulwark of security for NATO’s eastern and southeastern Europe and the Mediterranean.”

“Together, we’re showing the power and the capacity of democracies to be able to act in unison. And we’re helping Ukrainians say ‘no’ to Russian aggression. And we’re saying ‘no’ to tyranny and to the idea that autocracies will outpace democracies in the 21st century, because that’s what is at stake here in my view,” the US president said.

According Greek government sources, the two leaders also discussed the transformation of Alexandroupolis in northern Greece into a regional energy hub, as well as the many and important US investments in Greece..

As expected the Greek PM raised also the issue of the intensifying Turkish provocations, namely the overflights over inhabited Greek islands, stressing that these were part of security issues in the Eastern Mediterranean Sea.

The two leaders posted about their meeting on social media with a slight different focus:

Today, I welcomed Greek Prime Minister Kyriakos Mitsotakis to the White House for a bilateral meeting. We reaffirmed our strong relationship, celebrated 201 years of Greek independence, and discussed our ongoing efforts to support Ukraine. pic.twitter.com/NvX3H7W1li


“I was honored to meet President Biden at the White House. My visit is an opportunity to evaluate anew the level of the Greek-US relations. I honestly believe that they are at the highest historical level.”

Mitsotakis is visiting Washington upon an invitation by Biden. The Greek PM expressed hope that Biden will be able to visit Greece in the near future.

Mitsitakis is scheduled address the Congress and the Senate later on Tuesday, at 6 p.m. Greek time.