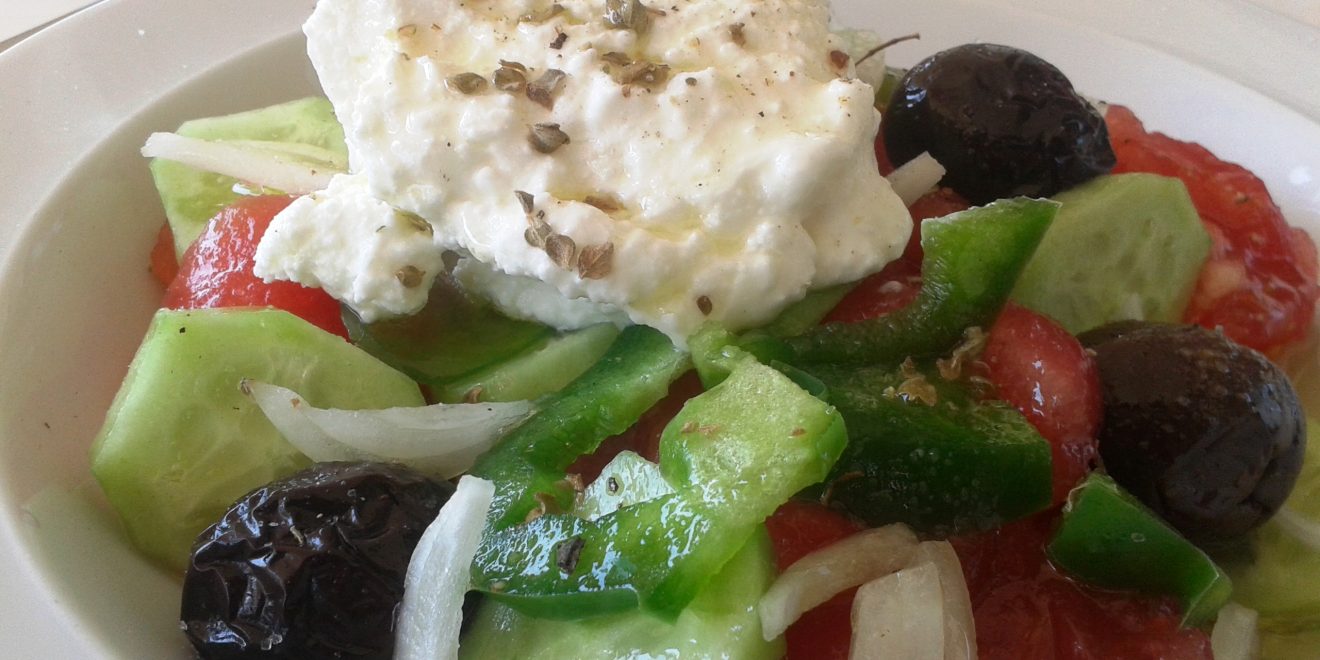 Who invented the Greek Salad?

The Greek salad, a landmark of the Greek cuisine worldwide: shiny-sweet tomatoes and crisp cucumbers, spicy white onions and green bell peppers, black olives. A thick slice of feta cheese on top of the mountain of fresh veggies. All rounded up with golden olive oil and aromatic dry oregano. 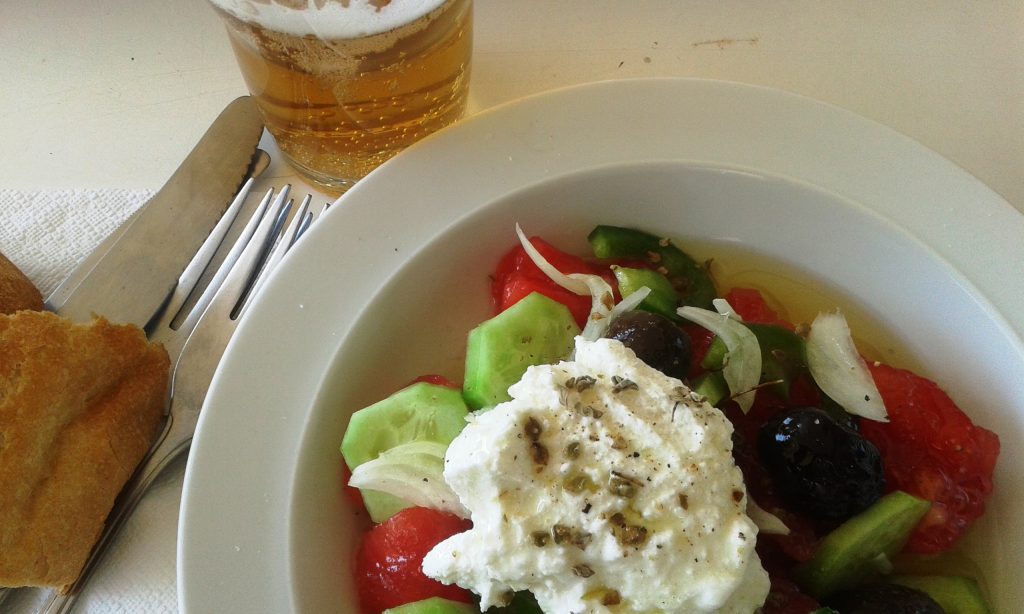 “Greek salad” for foreigners and “Horiatiki” for Greeks, where Χωριάτικη literary stands for “from the village.”

Accompanied by a few slices of bread, the Greek salad is a complete meal with protein, fiber and carbohydrates.

the most popular salad among Greeks and foreigners, whether at home, in the tavern or the restaurant?

Did villagers and farmers invent the “village salad,” with products they had on hand, products they were growing in their backyards and their fields?

According to reports, it was at the end of the 19th century, when the tomato entered the life of the Greeks, however, not as a component of the village salad.

Back then, those working on the fields in the countryside or did manual wok in the cities would take onions and olives and a thick slice of bread all wrapped in a kitchen towel for lunch at work.

Often cucumber was added in the “lunch box” of the early days, in rare cases also some cheese and tomato.

The thing with the fragile, juicy tomato was that it could be quizzed and makes a mess of the other food items and the  towel.

Making a proper salad with pure olive oil was out of question, for practical reason. No portable utensils to carry the meal at work and the heavy kitchen utensils were used for cooking at home over an open fire, anyway.

There was no fork and knife and the “meal ingredients” would be just bitten of.

Ultimately, it was the people in the city, the bourgeois, who gave to the vegetables of the Greek salad another form, freed them from the modest kitchen towel, cut them in large pieces, mixed them and put them on a plate, poured olive oil and secured them a well-deserved, eternal place in the middle of the table.

The Greek salad was born in the center of Athens.

According to one version reported by website in.gr, the Greek salad and thus in a form close to the current one was invented by tavern owners in Plaka, at the foot of the Acropolis hill somewhere between the 1960’s and early 1970’s.

And there were two significant factors that made them creative: the tourism development and the market regulations for plain salad consisting of just tomatoes and cucumbers.

In order to escape the state-controlled pricing, the tavern owners added a piece of feta cheese. The trick helped them charging whatever price they wanted, and the Greek salad was born.

Over time and in the sense of adding ingredients, raising the price, maybe one tavern added a few black olives, another thin green bell pepper slices and a third the oregano. 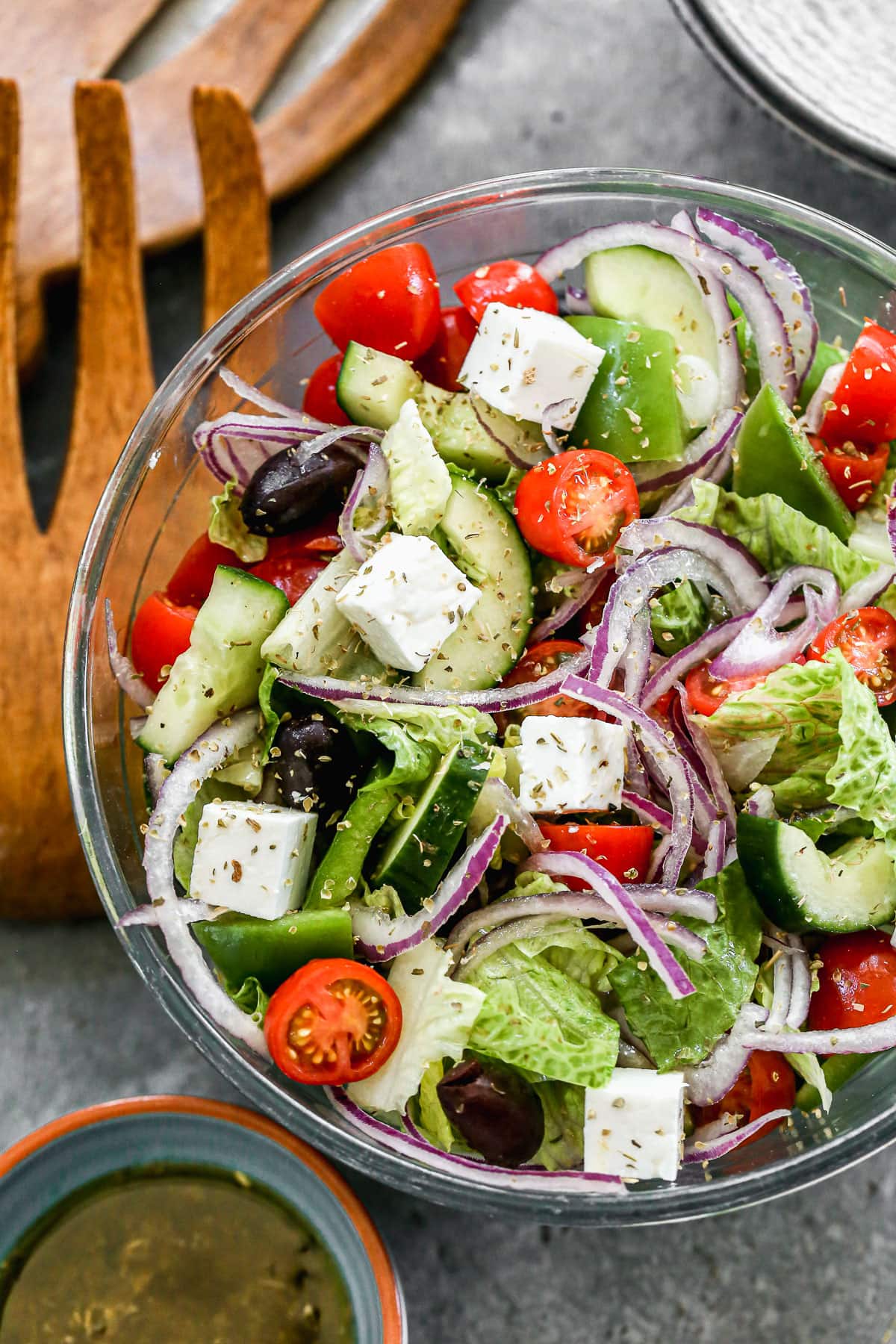 In some countries they add also lettuce in the Greek Salad and the feta is in cubes. What do they know?

Feta is cut on the plate with the fork by one of the many people sharing the salad. The tiny crumbles fall into the olive oil and tomato juice so that the famous “παπάρα“, that is the bread soaked in the oil-tomato-oregano “soup”, is extra tasty.

And guys! We don’t use cherry tomatoes for a traditional Greek salad. They are not juicy enough.

*thumbnail picture: Greek Salad at KTG’s balcony table with “soft” feta. Soft – μαλακιά – feta cheese is creamy and rather fresh and not so salty as often the feta-block