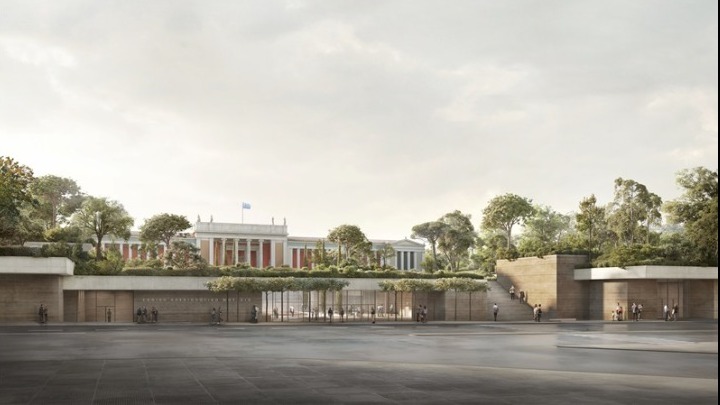 The winning entry for the New National Archaeological Museum is by the architectural offices of David Chipperfield Architects and Alexandros N. Tombazis & Associates SA, selected by an international committee convened by Culture & Sports Minister Lina Mendoni, the ministry announced on Monday.

The committee was set up in April 2022 for the New National Archaeological Museum, and also includes an upgrade of the old museum, a subterranean extension, and its link with the historic building Acropol-Akros on Patission (or 28th Oktovriou avenue), the street the current museum is on.

According to the ministry, the committee chose the finalist over the following points: for incorporating elements of a creative relationship between the old and new buildings, its quality of spatial experience, a sensitivity to museological challenges, the integration of urban design in the city, and the innovative solution of viability and environmental design issues.

Culture Minister Mendoni said all submitted proposals were noted for high quality, aesthetic, and vision, and were faithful to the criteria set out by the committee.

“We want to have an extroverted museum, in constant dialog with society, and with a dynamic focus to the future,” she noted. The presentation of the winning plan’s details, she added, will take place within February, with the Greek prime minister attending.

Funding for the draft architectural plan was provided to the ministry by the Nikolaos and Irini Lemos family. [amna]

The National Museum in Athens construction completed in 1889.