The trial of 13 German journalists working for the weekly magazine Focus began on Friday morning in Athens and was interrupted when the  judge asked an explanation as to why five of the defendants were not summoned to court. However no defendant at all appeared in court but they were all represented by German and Greek lawyers.

The trial is been conducted in the three-judge criminal court of Athens and the 13 German journalists, members of the editorial team of the magazine Focus, face charges and sentences for having published in February 2010 year the magazine’s cover with the  statue of Aphrodite in the obscene gesture and insulting comments about the Greeks. 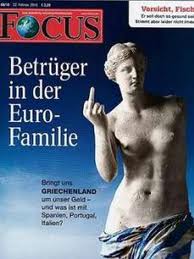 The defendants are accused of  accused of libel and defamation, attacks against symbols of the Greek state and insulting.

As mentioned in the indictment the Focus-cover “displays photos of the ancient statue of Aphrodite as deformed, ie dirty, a torn flag of the Greek state covering the body of this statue from the waist down, thus altering the meaning of the flag as a symbol of the state. ”

In addition, the statue of Aphrodite with “raised middle finger, a gesture which in combination with the title  ‘Dodgers in the Euro-family” offends the honor of the Greeks. ”

The trial has been postponed for November 29, 2011. For some of the defendants the offense could be written-off due to time passing. During today’s court seccions the  lawyers of the seven defendants who were present said that the publication does not constitute a criminal offense: “Even though we do not like the story, it’s not a criminal offense. The expressed views may be uncomfortable  but one must endure the criticism in the context of freedom of  press. ” They also spoke of  “arrogant selfishness” .

One of the plaintiffs described the publication as “despicable” , arguing as they cannot bulldoze everything and blanket all Greeks as crooks in the name of press freedom.