With an appeal to the Supreme Administrative Court/Council of State “Greek Taxpayers’ Association”, one private person and the “Lawyers’ Association of Athens” request the annulment of the decision for the emergency property tax to be paid via the electricity company bills. It is the first filed application against the temporary but in fact the permanent tax poll that triggered an outcry across the country as it comes in addition ot the other property taxes.

In their multi-paged application the TPA argues that the decision is against the constitution and it directly violates the European Convention of Human Rights. Because even the gravity of the case the Association urges the President of the Supreme Court to determine as soon as possible about the case. The poll tax has started already to arrive in the mail boxes of the taxpayers who are urged to pay from €500 up to more thousand euros within 40 days, otherwise they will have their electricity cut.

The Greek Taxpayers’ Association  stresses among others:

– The collection of taxes, the certificate of compliance and the administrative sanctions to individuals  are elements of public power via private companies something that distorts the general principle of  democratic policies.

– It violates the principle of tax equity, because it indiscriminately asks all property owners to pay an emergency tax only with the criteria of property age and value zone without taking into consideration the annual income of the property owner.

– The imposition of the emergency tax is the second property tax to owners.

– It downgrades the taxpaying property owner and even the unemployed to an object with the aim to achieve exceptional financial targets for reducing deficits.

– Cutting the electricity to those who are unable to pay this additional property tax leads to  extreme poverty and endangers the health and survival.

The TPA finally argues that:

“Avoiding the bankruptcy of the country might be reasonable to impose taxes, however our Constitution forbids the imposition of measures that result in a breach of the human dignity.” 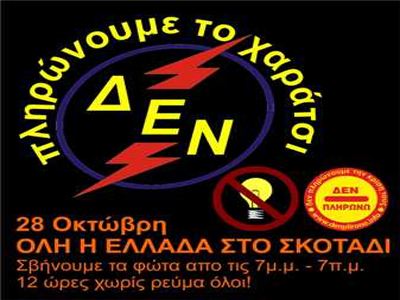 At the same time the civic movement “I Don’t Pay” calls citizens to turn off electricity on October 28th 2011 from 7 pm to 7 am. “October 28th”  is a national day commemorating the heroic “NO” by Greece to surrender ultimatum by dictator Benito Mussolini as part of the German-Italian Axis on October 28, 1940.