Even the representative of Samaras’ coalition government party, he himself personally, the leader of PASOK, Evangelos Venizelos was absent from the traditional military parade to remember the OCHI-Day and commemorate, the No Greeks told the powers of Axis on 28th October 1940. 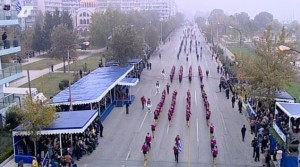 There were some unconfirmed claims in the press that Venizelos was allegedly abroad, while others claimed that he didn’t attend out of protest. Reason for the now disturbed relations between coalition government partners was a statement by Regional Governor of Central Macedonia, Apostolos Tzitzikostas (Nea Dimocratia).

Tzitzikostas had invited also neo-nazi Golden Dawn parliamentarians to the parade. To the heavy criticism by political parties and Thessaloniki mayor, Tzitzikostas replied on Saturday with an equally provoking statement.

“In the same logic I should not invite PASOK too because Tzochatzopoulos [ex defense minister charged with bribery] is in prison.” Tzitzikostas justified his decision triggering a heavy reaction from PASOK, that apparently decided to boycot the parade on political level.

Representatives from main opposition SYRIZA, Communist KKE and former Samaras’ coalition party Democratic Left did not take their places on the dignitaries tribune, as well. Opposition parties absence was meant to protest Tzitzikostas’ decision to invite Golden Dawn MPs, while the party leader is in custody.

At the very end also Golden Dawn refrained from sending its MPs on the tribune, the parade took place in front of the President of the Republic Karolos Papoulias, Defense Minister Dimitris Avramopoulos and Thessaloniki Mayor Yiannis Boutaris with the political world at odds with each other.

As for the common people… they turned their back to the fiesta that was aiming to unite people and strengthen the national sentiment in times of economic hardships.

People chose to walk along the lovely promenade of the city and enjoy their coffee away from the parade. They were excluded anyway. Draconian security measures allowed only those in possession of binoculars to watch the parade.

PS And here we pose the same question as we do since 2011: what is the purpose of a parade when common people are excluded?