More than 1,3 million people living in Greece are without a job. this number refers only to employees. Self-employed are not recorded in the official unemployment numbers. People without work have no health insurance. But they have diseases and conditions that need treatment. “Three million people living in Greece have no access to the health care system”, says the Greek department of humanitarian organization Medecins du Monde. 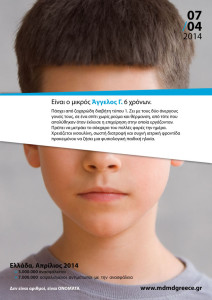 3,000,000 without insurance
7,000,000 insured faced with insecurity
They are not numbers, they are names
They are people with name and surname, health, family, friends, genetic profile, relationships, life expectancy, feelings …

-It’s Thodoris X., 45 years old , with cancer in progression, he needs computer tomography, requires surgery and chemotherapy and yet there is no health care to provide him with treatment.

– It’s young Nicoletta B. 4 years, suffering from epilepsy seizures, lives with her unemployed mother, she needs brain scans and laboratory tests, medicines and vaccines and there is no health system where she can find shelter.

-It’s  Grace E., asylum seeker from Nigeria,  who in the fifth month of her pregnancy , she was denied the scheduled blood tests in a public maternity hospital, free of charge, an inalienable right by the applicable law. Unfortunately  three more hospitals refused to provide her with free examination. Following MdM intervention, a private sponsor took care for Grace. There is no health care system for her and her baby.

– It’s Aggelos G. 6 years old, suffering from diabetes mellitus type 1 . He lives with two unemployed parents. He needs to check diabetes levels several times a day. He needs insulin and proper nutrition . He lives in a house without electricity and heating . He needs frequent medical care so he can live in his childhood . There is no health system to cover him .

-it’s Giorgos X., 50 years old, with chronic bowel condition, unemployed with family. He needs laboratory tests and biopsy. He needs medicines and medical monitoring the  complications of the disease. He has no access to any health system .
Medecins du Monde is there where there are people.. (MdM.gr)

Meanwhile the case of an unemployed woman, 40 years old, who died after a heavy brain stroke has triggered a war between media and the local community in Lesvos. The woman suffer a heavy brain stroke on March 27th, she was transferred to hospital and died a week later. Local newspaper Empros reported that the woman, mother of two, was unemployed and without insurance and that she had stopped taking her medicine for high blood pressure because she would not afford it. and this despite the fact that there is a “social pharmacy” on the island. Her relatives dismissed the newspaper’s claims and threatened to sue Empros. Speaking to Skai Tv, the reporter invoked issues of “dignity within a small local community.”

PS yes, I know people who need to overcome the barriers of dignity before apply for the social services for the very poor provided by the municipalities.