Life sentence for the two murderers of Pakistani migrant Lokman,27

April 16, 2014 Society Comments Off on Life sentence for the two murderers of Pakistani migrant Lokman,27 86 Views

An Athens court sentenced to life imprisonment and additional 32 months imprisonment Dionysis Liakopoulos and Christos for the cold-blooded murder of Sachzat Lokman, 27,  of Pakistani origin. The murder took place a year ago in Petralona suburb of Athens. The two men are also being defendants for the case of extreme-right Golden Dawn. The court unanimously adopted the prosecutors’ proposal and did not recognize any extenuating circumstances. According to court, the motive was  “diversity”

The two defendants were unanimously found guilty for the offenses of intended manslaughter, use of weapons and illegal possession of stolen goods.

The court  rejected the defendants’ claims that the victim had provoked them by blocking the road with his bicycle. 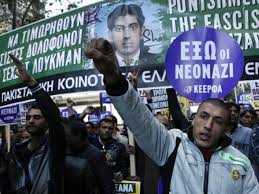 Sachzat Lokman was murdered with 7 knife stabs in the dawn of January 17th 2013, while he was riding his bicycle to work.

At the reading of the verdict the court did not rule whether the murder was “racism motivated.”

The victim’s parents were present in the court.