European Union Leaders and Turkish Prime Minister Ahmet Davutoglu share a working lunch on a long table. Main dish: The Refugee Crisis. But the full cannot understand the hungry. A block consisting of 8 EU countries insists that the EU Summit Conclusions clearly states that the Balkan Route will be closed not only for migrants but also for refugees. 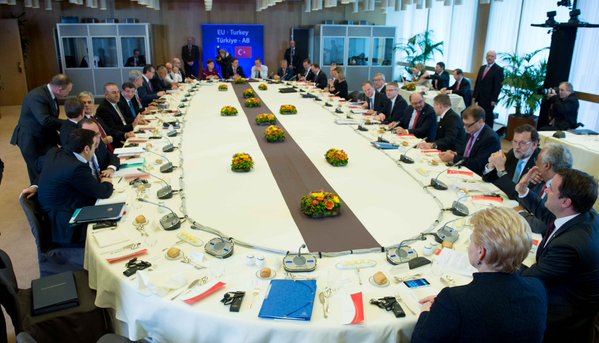 German Chancellor Angela Merkel cannot stomach this and insists that

“Our agenda can’t be about closing something”

Greek Prime Minister Alexis Tsipras fully supports Merkel – of course. According to information coming from Brussels, also the European Commission president Jean-Claude Juncker is on the side of Germany and Greece.

Saturday night and also on Sunday, Austria tried to convince us that the “28 EU ambassadors had agreed on a draft text that was foreseeing the Closure of the Balkan Route.” Vienna was practically implying that the EU Summit was not even necessary. – Dirty Games by politicians surrendered to the xenophobia and right-extremism.

Greece reportedly wants to have a sentence in the Conclusions text that “EU member states that do not implement decisions will be sanctioned.” The veto Athens threatened last week is apparently off the table.

Turkey is holding the key to stem the flow of refugees and migrants, and President Recept Tayyip Erdogan made a statement in Istanbul saying he hoped “Davutoglu will return with the 3 billion euro at hand.”

Sunday evening Davutoglu had a dinner with Chancellor Merkel and Dutch PM Rutte, who currently hold the EU rotating presidency.

The dinner allegedly lasted until 3 a.m. – most probably, because Davutoglou was holding a very long Wish-List and he was reading it out loud for his esteemed company at the table. Some Greek media, claimed on Monday morning, that Davutoglu wanted to raise the “3 billion euro” aid for refugees to 9 billion. I don’t have information on whether this was served as started or side dish, but another course was “safe passage for refugees with direct flights from Turkey to Germany.”

However, at 16:00, there is still no agreement about to close or not the Balkan Route.

The day is especially tough for Greece at risk to see thousands of refugees and migrants trapped here. Merkel has a chance to prove, she supports Greece. Yet. A Eurogroup meeting has started at 3 pm (Brussels times) with #Greece” high on the agenda. The creditors and the IMF will decided when they will visit Athens to proceed with the 3. bailout review. Greece’s European creditors disagree with the IMF, the IMF disagrees with Greece.

4:22 pm Lunch is over – Now EU Leaders stand still for a family picture

EUCO president Tusk announced that there will be a working dinner with Turkey tonight.

PS I should have read Greece’s horoscope this morning. And Davutoglu’s. because he eats too much…

to be continued… Refresh for Updates