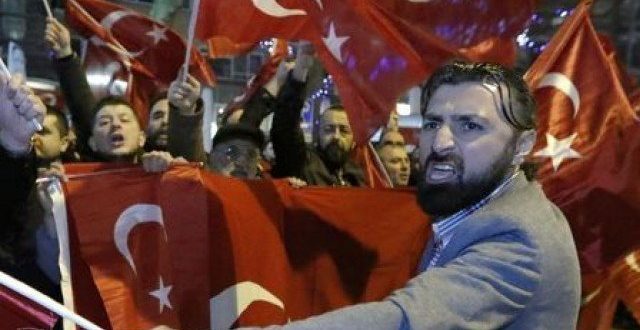 Greece’s Deputy foreign Minister Giorgos Katrougalos invited Turkey to carry out referendum rallies to expand powers for president Recep Tayyip Erdogan. The move comes amid a severe diplomatic row between Turkey and the Netherlands and when one after the other European countries prohibit Turkish politicians from campaigning.

At the same time, the deputy foreign minister’s announcement stuns diplomats and politicians given the recent tension between the two neighboring countries. Foreign Minister Nikos Kotzias  and Defense Minister Panos Kammenos speak of Turkey’s “provocative behavior” towards Greece and “exporting its own nervousness.”

Speaking to Skai TV on Monday, Katrougalos said “I cannot judge the internal decisions of other countries, but it is the rule in Europe to have such gatherings. The only problem that arises is that of public security.”

The deputy foreign minister was referring to the Muslim minority in Thrace, roughly estimated 100,000 people, who are ethnic Turks.

“There is no reason to prohibit communication with them [Turkey] and on the other hand, there is no reason to feed the tension that currently exists in Europe and could also lead to problems in our bilateral relations,” Katrougalos said and stressed that ‘there have been visits by Turkish officials in Thrace in the past.”

Foreign minister Nikos Kotzias said that “Turkey is trying to convey its nervousness to third countries.“

Defense minister Panos Kammenos who has been massively targeted by Turkish foreign minister Mevlut Cavusoglu said that Turkey has “a particularly challenging behavior, not only against Greece, but also against the allied countries.”

As Ankara has been firing diplomatic shots at every possible EU direction, its Armed Forces sent fighter jets and a spy plane type C-235 and violated the Athens FIR eight times on Monday.

Greece is known to be a generous and friendly country not matter how angrily and provocative Erdogan and other Turkish politicians behave. Apparently Athens won’t let a couple of Greek territory violations and Turkey’s provocations to spoil the positive atmosphere between the two countries. Now, everyone in Greece is wondering whether Katrougalos’ expressed the policy of the whole government or merely his own point of view.

Turkish President Recep Tayyip Erdogan, or rather his shadow, has made the cover of this …