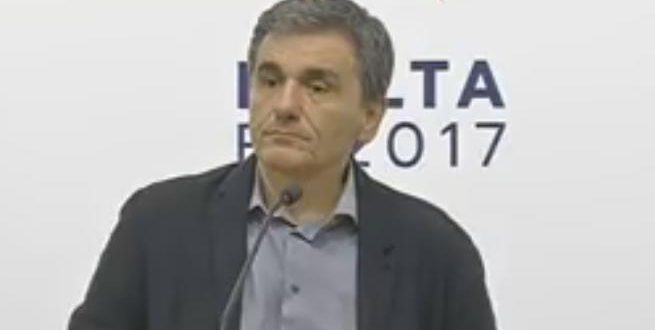 We  agreed on the key pillars that are important for us, some elements of the agreement are satisfying, some are not, Greek finance minister Euclid Tsakalotos said during a press conference right after the end of the Eurogroup meeting in Malta.

Tsakalotos revealed that the positive measures [counter-measures] in 2019 will affect mainly state expenditure, while the measures in 2020 will affect taxes, changes in the income tax and the  unified property tax (ENFIA) and even income tax.

KTG understands that tax income rates will decrease – most probably for individuals as wells as the property tax. Broadening the tax-free basis down to 6,000 euro and demand a tax rate of 23% is nothing a people with a monthly income of 500 euro gross can afford.

The finance minister said that the first package of positive measures will address children poverty, accommodation, investment, youth unemployment, self-participation of pensioners in the purchase of medication.

According to state ERT TV, the social measures for 2019 are planned as such:

On labor issues, Tsakalotos said that Greece and creditors agreed that there will be no rate increase in mass lay-offs and not lock-out on strike issues. Currently the rate 5%.

“It is the nature of any agreement that there are compromises, things that will upset us, not the negotiation team but the Greek people,” the minister added.

Before Tsakalotos, Eur0group head, Jeroen Dijsselbloem, had announced that Greece and creditors had agreed on austerity measures of 2% of the GDP.

The total amount of these two measures is 3.6 billion euros.

While Greece and creditors are yet to determine the new tax-free threshold reports of the week were saying creditors – in fact the IMF- wanted it down to 5,600-6,000 euro annual income gross.

The current Greek adjustment program “ends in August 2018. Short before that, we will decide on a mechanism for after 2018. It will determine whether the objectives have been achieved. There will be no supervision after 2018,” Euclid Tsakalots said.

The discussion about the primary surpluses for after 2018, will start as soon as the current staff-level negotiations conclude. (live press conference, naftemporiki.gr, ERT TV)

On the political aspect of the Eurogroup agreement, I have to note that SYRIZA stroke a nice deal and a legacy for the next Greek government. Greece is to go to elections in 2019.

I just wonder whether major opposition party will be insisting on demanding early elections now. And I am not the only one wondering.

With the social counter austerity measures Alexis Tsipras can sell the package to his lawmakers and have the deal pass through the Parliament.