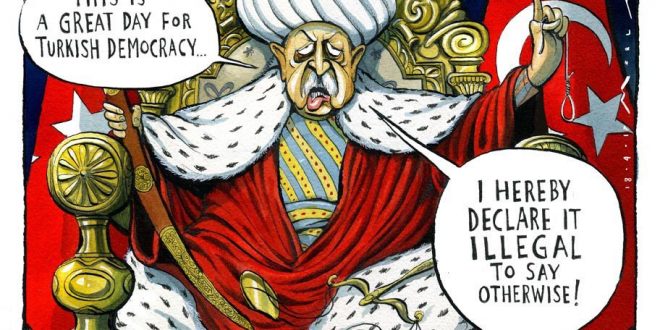 2.5 million Turkish referendum votes could have been manipulated, says observer

Up to 2.5 million votes could have been manipulated in Sunday’s Turkish referendum which ended in a tight ‘Yes’ vote for greater presidential powers, Alev Korun, an Austrian member of the Council of Europe observer mission, told ORF radio on Tuesday.

The mission of observers from the 47-member Council of Europe, the continent’s leading human rights body, had already said the referendum was an uneven contest. Support for “Yes” dominated campaign coverage, and the arrests of journalists and closure of media outlets silenced other views, the monitors said.

But Korun said there were questions about the actual voting as well.

“This is about the fact that actually the law only allows official voting envelopes. The highest election authority decided however — as it were, against the law — that envelopes without official stamp should be admitted,” she said.

“There is a suspicion that up to 2.5 million votes could have been manipulated, said the Austrian member of parliament, a Green.

Korun also said that police in the majority Kurdish town of Diyarbakir hindered two of her colleagues from entering voting locations. She also pointed to videos on social media, which appear to show people voting more than once, although this still had to be proven.

“These complaints are to be taken very seriously and they are, in any case, of such an extent that they would turn around the outcome of the vote,” Korun said.

A mission of observers from the 47-member Council of Europe, the Organization for Security and Co-operation in Europe’s (OSCE), the Office for Democratic Institutions and Human Rights (ODIHR) and the Parliamentary Assembly of the Council of Europe (PACE) said the referendum, which saw a 51 percent approval for the changes, was an uneven contest that took place in unfair conditions

International election observers’ criticism that the April 16 referendum on shifting Turkey to an executive presidential system fell below international standards has drawn an angry reaction from Ankara, which has slammed “biased and prejudiced approaches” to the results.

President Recep Tayyip Erdoğan immediately denounced the criticism, urging the OSCE to “know its place” and saying Turkey would disregard their “political” reports.

“There is an organization called the OSCE in Europe. Now they are preparing a report in their own way regarding elections in Turkey. You should know your place first. We will neither see, nor hear, nor know about your political reports. We will continue on our path. Talk to the hand,” Erdoğan told a crowd outside the Presidential Palace in Ankara on April 17.

The president claimed that the country had conducted the most democratic vote in its history.

Around 2:30 pm Turkish time, main opposition party CHP will file an official request for the annulment of the referendum. According to CHP irregularities were found in more than 10,000 electoral areas.

#TurkeyReferendum: Ballot papers with ‘No’ votes found on a construction site in the Suruc district of Sanliurfa, SE Turkey – Kom News

The CHP  said on Monday it would take its challenge to the European Court of Human Rights if necessary, after a last-minute decision by the electoral board to allow un-stamped ballots.