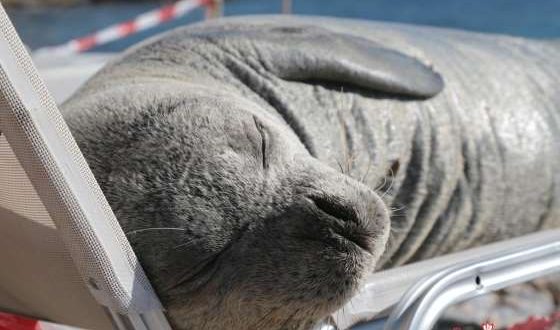 The Institute of Marine Conservation ‘Archipelagos” has confirmed that the famous Monk Seal of Samos is dead. The friendly animal has found a violent death with a shot gun and a sharp object. The Mediterranean Seal had found shelter on the island at a young age. She was cheering tourists and locals as she loved sunbathing on sunbeds. Locals called her “Argiro”. The monk seal had disappeared from the area a couple of months ago.

The body of a violently  Mediterranean Monk Seal – Monachus-Monachus – was washed ashore at Marathokampos beach on May 24th.

“Considering the skin characteristics, the sex and the length of the seal washed ashore as well as her absence all this time, it is confirmed that the killed seal was Argiro,” Miliou said.

The Port Authority of Karlovasi has already opened a file for the case, prosecuting authorities on Samos are also aware of the case.

The body of the dead Mediterranean Monk Seal was discovered on May 24th by researchers from the Archipelagos Institute of Marine Conservation.

Initially, it was sighted floating, presumably dead, in the south-west waters of Samos Island and due to the prevailing winds, it washed up on the southern coast of the island.

“The seal had multiple shot wounds from firearms on her back. Based on the angle of the pellet-wounds, it is suggested the seal was attempting to escape whilst being shot. Additionally, there was a traumatic wound from a sharp object that penetrated the right side of its back and extended to its stomach,” Archipelagos said in a press release.

Describing the killing of the endangered and protected marina mammal as “a  hideous crime” the Archipelago researches estimated that that the seal was killed within 24-36 hours before its discovery. “Taking into account the weather conditions, it is assumed the killing took place in the south west seas of Samos or east of Fourni island complex,” Archipelago said.

Monk seal ‘Argiro’ appeared at the Gagou beach in the north natural harbor of  Samos at a young age in 2014. Archipelagos researchers estimated she was a baby seal that for some reason left the flock or she simply got lost.

She enjoyed a great pleasure soaking in the sun on her favorite beach sunbed.

She was used to people but was still a wild animal of 130kg weight.

The institute personnel had sings warning visitors and tourists  to not feed, touch, play or even try to swim together with Argiro.

Institute personnel, volunteers and locals had done their best to protect this endangered mammal from all kinds of dangers incl. harassment by brainless humans.

The Monk Seal would travel along a coastline of 20 miles, permanent monitoring was impossible.

In May, researchers suspected that the killed monk seal was the famous “Argiro” but could not immediately confirm her death.  Due to the large lesions on her skin, it was not possible to confirm the identification.

“In any case, be it a famous or an unknown seal, the murder is equally despicable,” the press release underlined.

Institute Archipelagos continues and will intensify efforts to identify those responsible for the violent death of the Monk Seal.

Have in depth knowledge of local communities, Archipelagos accused “a very small minority of fishermen for such crimes” and said that “these despicable practices do not characterize the vast majority of Greek fishermen or the island communities.”

A research currently investigates “the unfortunate antagonistic interactions between Mediterranean marine mammals, including the endangered Monk Seal (Monachus monachus), and small-scale fisheries in the Aegean Sea.” Management and remediation suggestions include the implementation of marine protected areas and the use of specific fishing gear which could reduce the frequency of interactions, and thus mitigate the loss experienced by the fisheries, as well as contribute to the conservation of an endangered species.