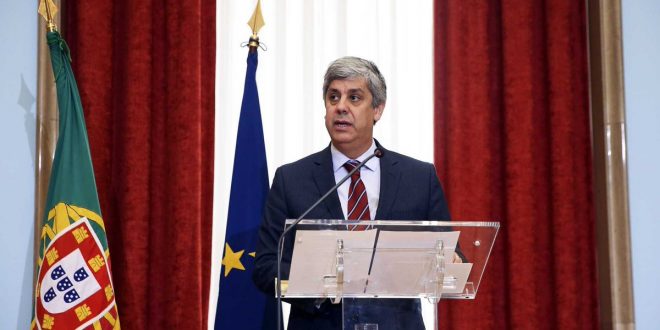 Portugal’s Finance Minister, socialist Mario Centeno won the Eurogroup presidency in two rounds of voting in Brussels Monday afternoon! The Latvian and Slovak finance ministers dropped out after the first round.

Centeno won in a head to head against Luxemburg’s Pierre Gramegna.

51-year-old Mario Centeno is an economist and academic  who is the Portuguese Finance Minister since 26 November 2015. Previously, he was a board member economist of the Bank of Portugal.

He served as the main economic policy advisor to Socialist leader António Costa, coordinating the Socialist economic programme before the 2015 elections.

Since taking office as Finance Minister, Centeno has enacted policies at home which reversed some austerity policies from the debt crisis, such as raising public pensions and wages to increase households’ disposable income, while insisting that European budget rules must be respected.

Who is Mario Centeno? He recently told Italian daily La Republica “you do not come out of the crisis only by cutting.”

Some Greek media already hail Centeno’s win as one who “supported Greece in the past.”

Mario Centeno will take office from Jeroen Dijsselbloem on 13. January 2018.

The Eurogroup now has an actual economist as its chief. Mario Centeno is an expert on labour markets, productivity, and wage inequality in Europe. Might come in handy.

At least, Centeno knows more about economics than the old Dutch chap!

Old news #Eurogroup The moment when @J_Dijsselbloem "reveals" the name of his successor from the 13th. "Did I say Mario Centeno. Please don't quote me". pic.twitter.com/bVpFDXxv3b

I read on Twitter that the right-wing flank in the European Parliament had agreed to pass over the presidency of the most neoliberal institution in the EU and the eurozone to the Socialists.

It is a nice change to see a European Southerner leading the Eurogroup, for a change.

Many eurogroup finance ministers must be feeling lost without Schaeuble beating the drum.

PS now we have another super Mario next to ECB’s Mario Draghi.