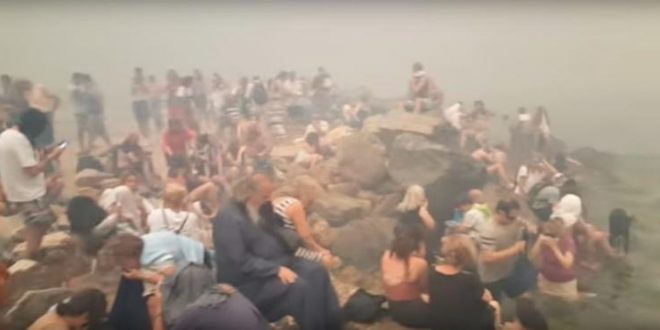 Dozens of people are stranded on a rocky beach in Mati. Parents are holding tight their babies, children are crying in their mothers’ arms, elderly are sitting exhausted on the sharp rocks, young couples are hugging each other. Some have covered their heads with wet clothes to reduce exposure to the thick smog and avoid inhalation of the hot toxic air. Some are shaking from the shock. The powerful wind is blowing over their heads and brings new clouds of smoke and unbearable heat. Others talk on their mobiles speaking to relatives and friends describing the hazardous situation they are trapped in. A little child is heard crying “I want to leave.” Adults debate if the sea would help the burn wounds or make them worse. It is Monday afternoon, 23. July 2018.

A week after the deadly wildfires in Athens and the tragedy of Mati is still being fully unfolding as fire survivors speak about the nightmare experience on the media and new footage keeps being unloaded on daily basis.

Nikos Verikokidis who shot the video told media that the people on this beach waited for 8 hours before they could be rescued.

“It was 3 o clock in the morning when the people were evacuated,” Verikokidis said.

The middle-aged man was at this rocky beach near the port of Mati together with his elderly mother.

When they arrived there, there was no fire service, no police, no coast guard.

Some 300 people waited for help for hours.

There were people with respiratory problems, people with burns, helpless people who managed to reach the beach just in time, just before the blaze swallowed their homes.

“Those who got aware of the emergency, left in time and reached the beach managed to survive,” Nikos Verikokidis said. “Those who left after 6:30 is unfortunately gone.”

Two firefighters reportedly arrived at the rocky beach around 7 o’ clock and evacuated  some children and their parents.

A week after the fire that left behind at least 91 dead, the Greek society is pressing for answers: How could this tragedy happen?