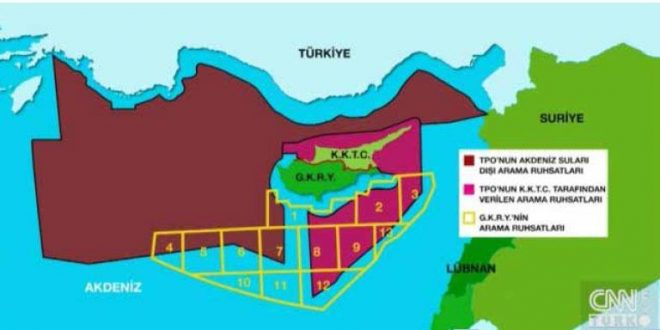 Crisis between Cyprus and UK after minister Duncan disputes EEZ

May 15, 2019 World Comments Off on Crisis between Cyprus and UK after minister Duncan disputes EEZ 5,545 Views

A crisis erupted between Cyprus and UK after Europe Minister Alan Duncan disputes Cyprus sovereign right on its own Exclusive Economic Zone.

“The Exclusive Economic Zone of Cyprus is a disputed area,” Duncan said in his speech in the House of Commons.

Duncan said “I met with the Turkish ambassador yesterday [Monday], and had a very constructive talk with him. The position of the United Kingdom is that, according to the UN Convention on the Law of the Seas, exploratory drilling cannot be conducted in any area in which the sovereignty is disputed.”

His statement triggered an outrage in the Republic of Cyprus as he was clearly supporting Ankara’s position.

British High Commissioner Stephen Lillie has been called to the foreign ministry to clarify statements by the UK government on its stance vis-à-vis Cyprus’ exclusive economic zone (EEZ).

Speaking after the cabinet meeting on Wednesday, government spokesman Prodromos Prodromou said Nicosia would make its demarches to London through the High Commissioner “on the unfortunate statements” by Minister for Europe Sir Alan Duncan.

According to daily Cyprus Mail, Duncan’s comment comes amid reports that the Turkish drilling ship located 60km west of Paphos seemed to be preparing to start drilling in the island’s waters.

“Mr Duncan has been and continues to remain unacceptable,” President Nikos  Anastasiades said on Tuesday night.

The British Foreign Office had earlier sought to clarify its position but triggered more confusion instead.

In reply to a request on behalf of the National Federation of Cypriots in the UK by Mike Freer MP for clarification on Sir Alan’s statement, the Foreign Office initially repeated the same statement as the British minister saying: “The position of the UK is that, in line with the UN Convention on the Law of the Sea, exploratory drilling should not proceed in any area where sovereignty is under dispute.”

Then, however, the Foreign Office went on to repeat a contradictory statement on the UK’s long-standing position saying: “We recognise the sovereign right of the Republic of Cyprus to exploit the oil and gas in its internationally agreed Exclusive Economic Zone. We believe Cyprus’ oil and gas should be developed for the benefit of all Cypriots, as the Foreign Office has said before.”

While Cyprus is preparing to contact directly Prime Minister Theresa May on the issue, Turkey has published maps in which it claims its continental shelf extends far beyond any limits and into the continental shelf of Greece and Cyprus. 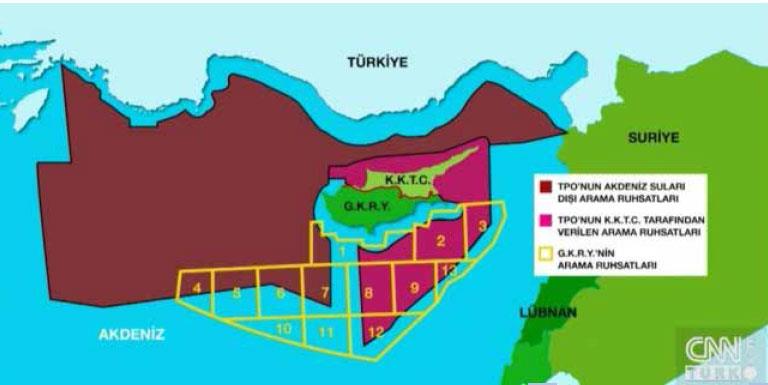 In a briefing to foreign ambassadors on Tuesday, Ankara presented these maps claiming that the Turkey continental shelf not only extends far beyond its limits, it also connects to the continental shelf of Egypt with which Cyprus has signed an energy agreement.

With red Ankara marked the alleged Turkish continental shelf where it has also deployed drilling ship Fatih. With the color pink it marked an alleged continental shelf of the Turkish occupied North Cyprus, a pseudo-state recognized only by Turkey. With yellow it marked the plot of the Republic of Cyprus which Turkey does not recognize and claim that they coincide with its own plots for exploitation.

The Turkish diplomats told the foreign ambassadors that Ankara is to conduct drilling in its own area.