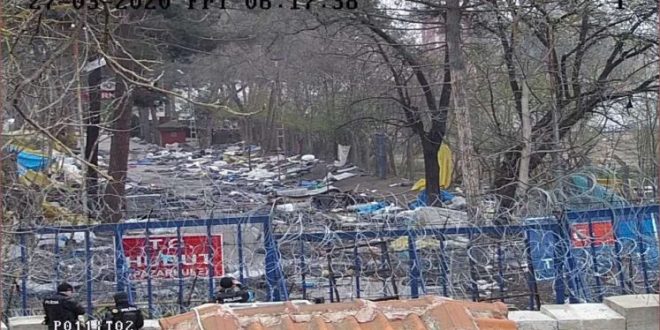 Turkey threatens “migrants will return to Evros when pandemic is over”

Turkey ‘s Interior Minister Suleyman Soylu has threatened Greece and Europe that the migrants would return to Evros border once the coronavirus pandemic is over. The removal of migrants from the border last week “did not amount to a change in policy,” Soylu told NTV.

He added that the migrants would be free to return once the pandemic is over.

“When this epidemic is over we would not prevent whoever wants to leave,” Soylu said.

They have been taken to migration centers in nine provinces, he said.

Last Thursday, Turkey ‘s forces organized buses and had reportedly some 6,000 migrants waiting at the Turkish-Greek border to cross into the European Union transferred to cities inside the country.

The move was reportedly one of several measures to prevent the spread of coronavirus.

According to Turkish news agency DHA, Turkish officials warned the migrants of the risk of infection with the novel coronavirus in case they stayed outdoors in the border region for even longer.

The migrants were evacuated by bus to facilities where they would be in quarantine for two weeks to make sure they have not been infected with the coronavirus.

State-run Anadolu Agency said that some of the migrants asked to be moved, while others had to be convinced.

The tents in the make-shift camp were set on fire.