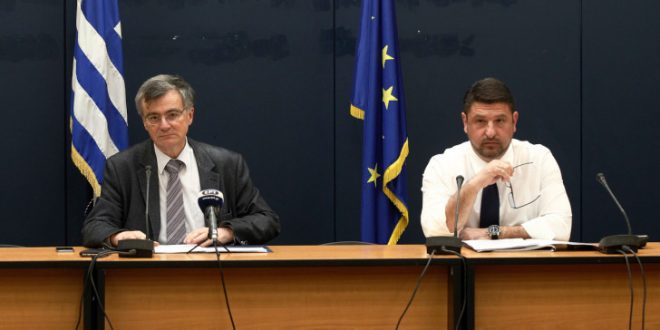 “Without restriction measures, we would have 13,685 deaths,” spokesman of National Health Organization and Professor for Infectious Diseases, Sotiris Tsiodras, said on Tuesday evening, on the last live broadcast briefing on the course of the pandemic.

He announced 10 new confirmed cases with eight of them being related to another confirmed case. The total infections stand at 2,892 and the death toll at 173.

A total of 18 patient are in hospitals Intensive Care Units.

A total of 160,291 COVID-19 tests have been conducted since the outbreak late February.

Given the good epidemiological data in Greece, mostly single digit ones in the last couple of days, Tsiodras and the head of Civil protection, Nikos Hardalias, announced the end of the live briefings on coronavirus.

“If you see us here gain, this will mean that things are bad,” Hardalias said.

Data on the course of the virus in the country will be given per written statement once a week.

“Based on our mathematical estimates, we had a total rate of cases of less than 1% of the population,” Tsiodras said summarizing the course of the coronavirus in the country.

“Today, 173 deaths have been recorded. With the best possible scenario, ie 0.55% and without strict restrictive measures, ie a reduction in population contacts of about 10%, the number of deaths would have an average value of 13,685 deaths,” he added.

“Should I forgot the mathematical estimates and in our country we had about 500 deaths per million, less than the ones I mention, we would expect about 5,400 deaths,” Tsiodras added.

Both Tsiodras and Hardalias got emotional in their closing speeches and urged citizens to keep implementing the necessary protection measures.

“Return to normlity has started. With care. The virus still exists. IT easily spreads. When I have symptoms, I have to be checked, isolated, receive therapy when needed,” Tsiodras underlined.

So what is happening now? Is the threat over?

State Minister Giorgos Gerapetritis told Apha TV that “now the country, the state health system is ready to deal with more infections as the hospitals have been enhanced with bed in intensive care units and health personnel, and the citizens know how to protect themselves.”

He ruled out a new lockdown in case there is a second wave of the pandemic citing also the reasons above.

And yet some Greeks are considering that opening of tourism as premature.

It is difficult for people to switch from scaremongering to let loose.