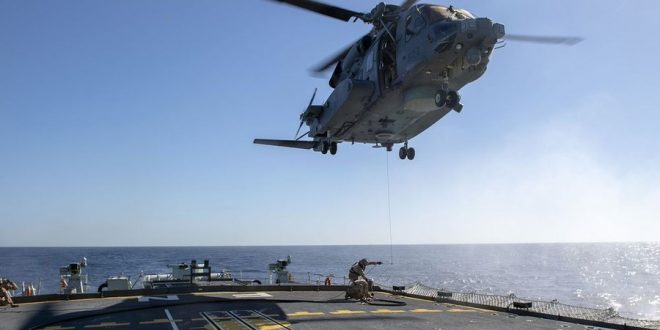 May 28, 2020 World Comments Off on Wreckage of Canadian Cyclone helicopter located in Ionian Sea 561 Views

One months after its crash in the Ionian Sea, the wreckage of a Canadian Cyclone military helicopter and human remains have been located on the bottom of the sea by a U.S. Navy drone submersible.

The recovery and salvage drone located large pieces of the fuselage in 3,143 metres of water.

Human remains were also found “in the vicinity,” said the statement, but DND was unable to say whether they’re the missing crew.

The search for more debris and remains will continue over the next few days. The military said again that it will stay on the scene as long as possible to collect as much as it can.

“This is encouraging news,” Lt.-Gen. Mike Rouleau, commander of Canadian military operations, said in the statement.

“We do not leave our fallen behind, and recovering Stalker 22’s crew is of the utmost importance to all of us in the Canadian Armed Forces and the Department of National Defence.”

Retrieving the helicopter wreckage itself will also go a long way toward helping crash investigators find out what happened, he added.

The relatively new Cyclone helicopter inexplicably went down on April 29 as it was approaching HMCS Fredericton, the Canadian patrol frigate it was attached to during NATO operations in the Mediterranean Sea.

The accident killed six members of the military — four aircrew and two sailors.

The body of Sub-Lt. Abbigail Cowbrough was recovered almost immediately after the crash. The partial remains of one of the Cyclone’s pilots, Capt. Brenden Ian MacDonald, also was retrieved from the crash scene.

Rear-Admiral Craig Baines, the commander of Canada’s East Coast fleet, said the recovery operation could take some time because the salvage team will need to be precise and thorough.

“While early search efforts have been met with a degree of success, the operation is complex and may continue for some time before we are able to determine that all critical requirements have been met to cease recovery efforts,” he said in the statement.

The Cyclone maritime helicopter fleet has been effectively grounded since the accident.

Flight safety investigators are required to file a preliminary report within a month of the crash, which, while not conclusive, will outline the avenues of investigation and probable causes. [CBC.CA]