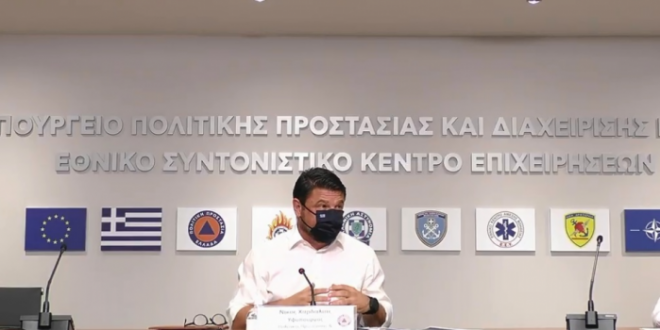 In his weekly briefing on the course of the pandemic in Greece, Head of Civil Protection and Deputy Minister for Crises Management Nikos Hardalias stated that there have been 961 confirmed coronavirus cases last week and that this “fact that led to the government’s decision to impose additional measures in order to curb the spread of the virus.”

Referring in detail to the new measures announced on Monday and clarified that the negative PCR molecular test for those entering the country does not concern children up to 10-years-old, “children born after 2011,” as he said.

Hardalias stressed the need for compliance by all and the individual protection measures not to have a proliferation of cases.

He added that a fine of 10,000 euros is to be imposed to owners of restaurants, cafes and bars in specific regions where they will be obliged to closed from 12 midnight until 7 o’ clock next morning.

The measure has upset business owners especially in touristic area such as Crete who have complained saying why Crete with 33 infections and not Attica with 406 active infections.

Hardalias said that that decisions are not taken based on numerical criteria only, but the main thing is to see what the image of the coronavirus is in the community.

On example of Crete, he said that there are infections throughout the island. “33 cases is not a reason to panic. The issue is what tracking shows. And this shows that we have a large number of high risk close contacts and not low risk.

Tracking these 33 cases and their close contacts shows a large percentage of movement from regional unit to regional unit. These data are inserted into an algorithm that projects what will happen in the next 7-8 days if no measures for individual protection are taken in order to avoid multiplication of the infections, Hardalias explained.