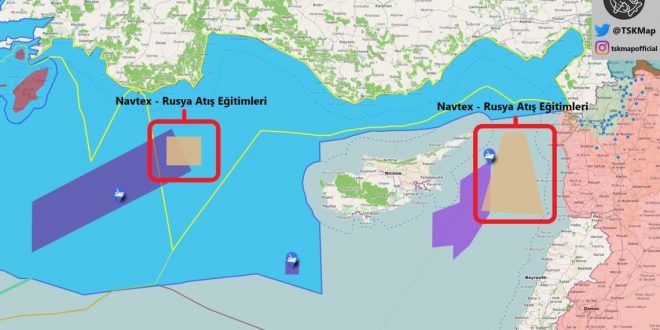 Turkey apparently does not enjoy a party alone and invited a special guest: Russia. According to Turkish Navy, Russia will hold two naval exercises in the eastern Mediterranean beginning next week and for this purpose it has issued two Navtex to reserve sea areas in areas where Ankara is conducting also illegal seismic – read: hydrocarbon – surveys.

The move could fuel new tensions in the region especially with neighbors Greece and Cyprus.

The Russian navy will hold firing exercises with live ammunition; one is scheduled September 8-22 and one September 17-25.

According to the Turkish Navy’s Office of Navigation, Hydrography and Oceanography, the two exercises will take place south of the Greek island of Kastellorizo and off Cyprus’s Karpas peninsula.

Navtex – number 1103/20 is for live-fire  exercises for September 17-25 off the coast of Cyprus in an area where Turkey’s Barbaros seismic survey vessel is active.

Here is the location of Russian firing exercises declared through Turkey-issued NAVTEX via @TSKMap pic.twitter.com/Kl8s2EQz4U

Nicosia has reportedly issued a counter-Navtex.

The Russian Navy exercises and the Turkish Navtex come after the US announced the partial and temporary lifting of a decades-old arms embargo to Cyprus. Ankara “warned” Washington that it would take “reciprocal measures to protect the right of Turkish Cypriots.”

According to media, there has been so far no confirmation or public statement from the Russian side on the planned exercises.

It is unclear whether Moscow intends to send a message of support for Ankara or it’s just a show off against the NATO.

PS Given the fact that the French aircraft carrier Charles de Gaulle is sailing in the region as well, it will soon be pretty much crowded in the area.