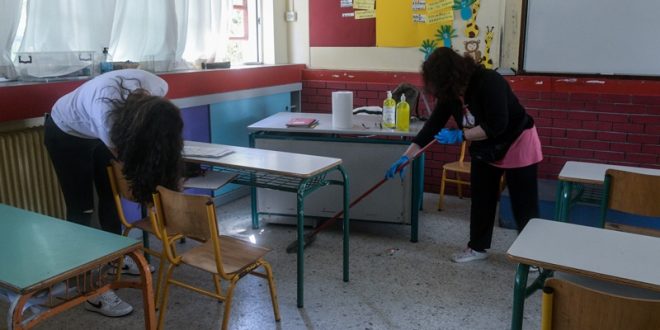 Sixty school cleaners were excluded form hiring this school year because of law change that now requires that they must have Greek language certificates and have Greek citizenship.

According to the teachers’ union Parthenon, the cleaners were excluded from hiring in schools within the Municipality of Athens and they worked for more than 10 years in the area schools..

However, the certification of Greek language was considered a prerequisite for the first time.

“These women do not have, of course, such a certificate, and they have been fulfilling their duties for so many years and a relationship of trust has been established between us,” a principal of an elementary school in Athens told news website tvxs.gr.

The relevant decision published in the Official Gazette on August 18, 2020, provides that the following have the right to submit an application: the candidates who are

“For candidates without Greek citizenship, knowledge of the Greek language is required to a degree sufficient for the performance of the duties of the relevant specialty,” the law underlines.

The Parthenon Union speaks of a “racist law that excludes migrant women from the hiring process.”

It underlines that the new recruitment process results in the opening of schools without cleaning staff and thus for the first time.

Worth noting that the anti-pandemic protection measures in school require increased cleaning services.

“More than 50 immigrants cleaners who work even for 18 years in the schools of the municipality of Athens are excluded from the current recruitment of fixed-term contractors. Until last year, those who worked in the cleaning of schools and were not permanent workers were hired under a project contract with ridiculous wages, among them many immigrants,” the union said in a statement.

The union stressed that this racist legislation excludes migrants from the hiring in schools.