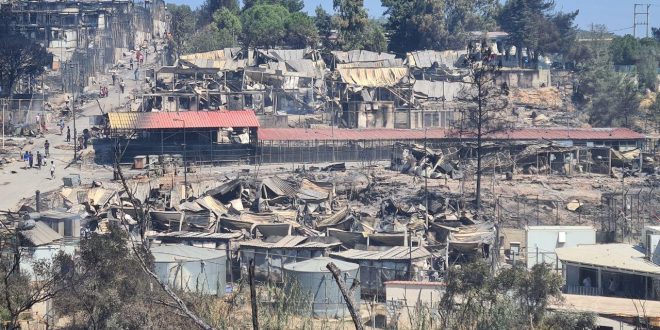 Greek opposition parties sharply criticized the New Democracy government saying that it has huge responsibilities for the situation in the hotspot of Moria and the fire that destroyed it.

“New Democracy condemns the local community, the refugees and the migration to misery.”

SYRIZA accussed the goverment that in its election campaign it promised to close the Moria hotspot but the only thing it achieved was to receive a structure hosting 5,600 people and to exceed 20,000 before it started the de-congestion program.

It accused the Prime Minister of turning Greece in a warehouse of souls because he did not press for a comprehensive EU initiative. “With its choices, the government led to today’s tragic result in Moria,” SYRIZA said.

The left-wing party called on everyone to refuse turning the islands into prison and asked for immediate European initiatives of solidarity and coordination.

The government’s responsibility as well as that of the Ministers for Migration Policy and Citizen Protection are enormous,” socialist Movement for Change (KINAL)/PASOK said.

“If there were provocateurs, as they claim, they must resign as they were the ones who let them act uncontrollably,” KINAL said.

It added that the government has lost control of the hosting structures. It ignored the de-congestation and maintained the jungle conditions and hid the growing problem behind communication fireworks of the responsible Ministry. KINAL added  hat “if it is an arson, as all indicate, then Justice must intervene.”

Communist party KKE said that the government has enormous responsibility for the fire and demanded the decongestion of the camp. Refugees and asylum-seekers should be relocated to the mainland and from there to the European countries under the observance of health protocols.

Yanis Varoufakis’s MeRA25 said “no to concentration camps” and that all refugees should be allowed to freely move in Europe.

Far-right Eliiniki Lysi said all migrants should be placed in uninhabited islands and  from there to be deported as soon as possible.

The unofficial but mainstream line on the Moria fire is that clashes broke out between refugees and asylum-seekers when   35 people tested positive to coronavirus refused to go to isolation together with their families. As reaction, some of the set tents outside the camp on fire.

While no infection was recorded in the camp since the outbreak in late February.

Beginning of September, a 40-year-old recognized refugee was tested positive to the virus after he returned from a travel to Athens. The man was staying in a tent outside the camp. With a few days, the number of infections had increased to 35.

The camp was placed in strict lockdown on September 2,, although their movement was restricted since March.